Provided It Goes Away

Let me say this at the start: I am against banning Wagner’s or Tchaikovski’s music because they were, respectively, Antisemite and Ephebophile. But hey: they were Wagner and Tchaikovski!

The situation is entirely different when it comes to, say, David Haas. The Archdiocese of L.A. has now effectively banned his music. Yes, the parishioners will, when the churches reopen over there, have to listen to some other rubbish. But at least, not his.

Let me also say to you that I have a yiuge problem with this concept of “grooming” when adults are involved. In the simple world in which I live, and in the sane society in which I grew up, a woman who “felt obligated to perform sexual favors in exchange for professional opportunities” is, most emphatically, **not a victim**, and there is another name for her that is much, much more apposite. But hey, in the age of #metoo, slutting it out for professional advancement has apparently become something a woman has to do, because “feeling…”.

Still, I do not want to quibble on the reasons why horrible music is being purged (no doubt, many more Dioceses will follow L.A.’s example. Being P.C. is the new religion. I am, actually, slowly afraid for Wagner…), because I very much like the outcome.

You might say that the horrible music will be replaced by different horrible music. I answer to this that it is like trying to eliminate ants from your house. Start eliminating, at some point the situation will improve. A long journey begins with the first step, etc.

When more of these wannabe composer’s horrible music is purged from the Mass (the comments to the linked article hint to, hopefully, more action at some point) let us not be too picky as to why the horrible music has been banned. I am happy.

Provided it goes away.

Let me start with a preliminary consideration: I find it very good, and very Catholic, to appropriate ourselves of Protestant music for our Catholic purposes. In past centuries – far more orthodox than this one – good souls had no hesitation in using the wonderful work of, say, Bach and Buxtehude for our beautiful liturgy. This was also easier, as in those times Protestant liturgies were much more similar to the Catholic one than today. The praxis was also reciprocated (understandably, from their perspective) by the Proddies, which led to the very famous episode of Allegri’s Miserere, a composition of such supernatural beauty that the commissioners decided that it should never fall in Protestant hands.

However, the principle remains: take the beauty produced by heretics and use it ad maiorem Dei gloriam instead. I will go so far as to say that I wish this effort were made today with the same zeal, adapting the words were necessary – and always reading the words in the Catholic sense – but importing the vast patrimony of beautiful Protestant music in our own Catholic world.

This is all good, provided we do what no child of ten would do: confuse the liturgies. This would be extremely bad even if made in ignorance, but it becomes positively satanical if made with the obvious, stated intent of downplaying the One True Church and put it beside any old Proddie wannabe “church”, as if they were merely two varieties of ice cream.

What has happened in St Peter is an abomination difficult to describe with words. I do not doubt that the music was wonderful, but this is exactly not the point. The point is that the lure of the beautiful music – beautiful music which should be “annexed” by the Catholic Church, and used to extol Her glory after the necessary adjustments – was used to allow a protestant mock liturgy to happen within the very sacred wall of the most representative Church in Catholicism: complete with mock priests, mock costumes, mock blessings, and the like.

The only adjective that comes to mind is: satanical. Only Satan can be behind such a grotesque insult to the Catholic Church, perpetrated by Pope and Cardinals and publicly executed in the presence of two of the latter. A sacrilege beyond words, perpetrated with the blessing, and in the presence, of what goes today for Princes of the Church.

Mr Ferrara has said it so well that there would be no need to add more words; but as I write this blog also in order for it to speak on my behalf in my last hour, I wanted to have my inadequate considerations added to the pages of this little effort. When Francis’ offences and abominations go beyond what can be said with words, it is fitting that outrage be expressed by as many people as possible, irrespective of their ability to convey the extent of the sacrilege.

What Francis and his minions are doing goes beyond the scale of the imaginable only a few decades ago. It is astonishing to see this old man throw away the mask and openly, publicly, almost daily proclaim an alternative religion even as he insults and berates those who prefer to follow the old (and only) one. I can easily imagine the man putting a Buddha statue, Assisi-style, on the main altar of Saint Peter himself, and boast of the feat whilst his Cardinals blather about “tearing down walls”.

We have come to this point. I can’t imagine the situation will improve as long as Francis is Pope. Actually, my impression is that his attack to everything that is Catholic will get more and more aggressive, defying imagination again and again. We are living astonishing times.

Is the Pope Catholic?

In name and official function only. In reality, he is a dyed-in-the-wool enemy of the Church.

Pray that 2017 is the year that rids us of this scourge. We don’t know what will come afterwards, but at least we will have a shot at some sort of improvement.

Like the excellent Charles Pope in this blog post (and thank God for a priest saying to us that he “joined the church choir to meet the pretty girls who sang there”)  I always felt a strong connection between music and God. Not in the sense that I though that there must be a God because I hear beautiful music (I am one of those fortunate being who always had, since childhood, a strong interior feeling of the existence of God; something you can’t explain to those who haven’t it more than you could explain how it is to be in love to those who never were) , but because in my eyes music must tell even to the atheists that man con achieve summits by which one can, even as an atheist, seriously doubt that this is purely the work of man.

I wasn’t the youngest anymore (perhaps thirteen or fourteen), and it literally (as in: no air) took my breath away and sent such shivers down my spine like I had never had before. I still can’t hear the start of this wonderful example of truly divine beauty without having a shiver sent down my spine again, every time.

Much as I admire Schubert as one of the very, very greatest, I simply can’t see in this the unaided work of a human mind. No doubt, Heaven came down to give us a glimpse of Its glory and majesty and stunning, aching beauty. And the same impression happens, by the chap in question, rather often to me (for example by listening to this and this, pieces by which you wonder how humanity coped before having them). If you consider that he himself declared that his Ave Maria was composed in a period of “overpowering devotion to the Blessed Virgin”, you get my drift.

Music truly catapults us in another dimension, throws away all our reasoning and rationalising and takes control of us in such a way that, with such an instant immediacy, really should let us think .

The problem with the atheists is that in their fantasy of omnipotence they think that man can do everything. Therefore, they will not recognise God’s work when they are put squarely in front of it.

Beethoven used to say (can’t find the citation anymore) something on the lines that his music (not only sacred music, of course; but also glimpses of Divinity like this one) was able to led people to God more than many priests would. Whilst a composer certainly can’t effect the consecration, I think we get his drift, too.

Comments Off on Music and God

How do you fill an Anglican Church? 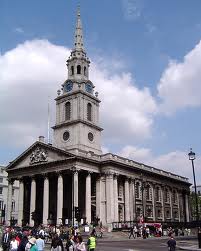 The concert-hall of St. Martin-in-the-fields. Also used as church.

Comments Off on How do you fill an Anglican Church?