The Triumph of Sacrosanctum Concilium

“The rites should be distinguished by a noble simplicity; they should be short, clear, and unencumbered by useless repetitions; they should be within the people’s powers of comprehension, and normally should not require much explanation.”

If you visit Rorate Caeli, you will not fail to understand how the pastoral mentality of Vatican II has revived the Church and given new meaning to an old, tired, formal ritual.

Notice the solemnity of the priest; the noble simplicity of his, should we say, altar; the raptured participation of the youth attending the ceremony, to whom the celebrant nobly gives his back; the atmosphere of simplicity and yet, solemnity  that clearly transpires from the pictures. I do not doubt that the celebration was short, let alone unencumbered from useless repetitions. Can’t imagine it stretched the presents’ powers of comprehension, either.

Oh, to be able to attend such a mass! Oh, to be able to revive the unadorned simplicity of our liturgical masters, The  First  Christians! How have we become prisoners of symbols, and ceremonies, and banal objects like…. altars!

I look at the pictures, and wonder what has gone wrong with us. 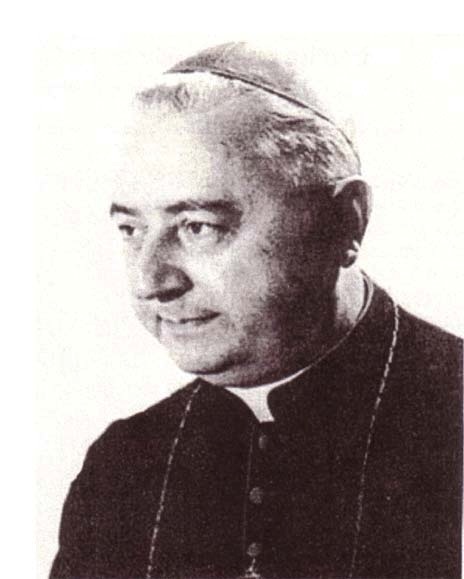 Rather astonishing remarks from the Holy Father during his address to the participants at the Conference for the 50th anniversary of the Pontifical Liturgical Institute. Let us read the piece in the translation of Rorate Caeli (emphases mine):

The Liturgy of the Church goes beyond this same “conciliar reform” (cf. Sacrosanctum Concilium, 1), whose purpose, in fact, was not mainly that of changing the rites and the texts, but rather that of renewing the mentality and placing, at the center of Christian life and of pastoral [activity], the celebration of the Paschal Mystery of Christ. Unfortunately, perhaps, even by us, Pastors and experts, the Liturgy was treated more as an object to be reformed than as a subject, capable of renewing Christian life,

This is astonishing. Totally en passant, Pope Benedict informs us that V II was not about reforming the liturgy, but about an extremely and conveniently vague “renewal of the mentality”, and (incredibly) about placing the Eucharist at the centre of Christian Life.

It is as if the Holy Father would, with just a few chosen words, demolish the entire edifice of Vatican II by just saying that its value is not in what it was done, but rather to be sought in an extremely undefinable “renewal” which, when you take away the renewal effectively put in place (that is: the rape of the Liturgy, and the departure from staunch defence of Catholic values), means everything and nothing.

The second point is,  in his well-meant attempt to hide the shame of Vatican II – rather offensive of the pre-conciliar Church. This idea that the extremely strong and pious church of the decades up to the Fifties, marked by a respect for the Eucharist rather forgotten in our times (a Church in which the mere idea of receiving communion standing on the hands would have been considered preposterous, and in which the idea that the Mass must be an interactive circus rather the re-enactment of Christ’s sacrifice would have been considered utterly Protestant), would have not put the Eucharist in a central place is just outlandish. Frankly, I think that the Holy Father should back pedal on this, and apologise.

In his attempt to defend the indefensible (that is: to try to make sense of V II), the Holy Father goes on saying that unfortunately the Liturgy was treated more as an object of reform, than as a subject. This means, if we want to give meaning to a rather rhetorical expression, that the Liturgy has not been treated as the centre itself of the Church’s life, but as material for experiments. Which is absolutely true, but contradicts squarely what the Holy Father has said above, that the scope of V II was to put the Eucharist at the centre of pastoral life.

The liturgy is at the centre of Church’s life and the Eucharist is at the centre of the Liturgy. You can’t say that V II was made to put the eucharist at the centre of Church life and in the same breath admit that the liturgy of which the Eucharist is the absolute focal point has been neglected and mishandled. The abuse of the Liturgy is abuse of the Eucharist, and this claim of the supposed (and up to now rather unknown) aims of the Second Vatican Council is nothing more than a pious attempt to try to hide its total and utter failure by extolling some supposed and vague good intentions.

The Holy Father has understood that V II is bankrupt. Unfortunately, though, he falls short of openly saying what every sensible Catholic has long realised. Instead, he tries to redefine the Council so as to let the wasteland it left appear like nothing more than a somewhat careless byproduct of some vague, but pure, ideal.

Once again, the Holy father’s approach to the Council reminds me of Gorbachev’s approach to communism: to try to save what has openly and irremediably failed by redefining it and attempting to persuade us that it was not about its original intent, but about something different. But you know what? It wasn’t. Communism was aimed at destroying Capitalism (and religion) and substitute them with a completely new world and humanity, and Vatican II’s “renewal zeal” was simply aimed at destroying the traditional Catholic understanding of morals and liturgy and substitute it with an age of alignment between religious and secular values.

V II was there with the main aim to – not to put too fine a point on it – brown-nose to “modern times” and Protestant thinking. This, the Conciliar Fathers have done with great zeal, both during and after the Council, in the most shameless of ways.

I appreciate the fact that the Holy Father has with his statement dealt another blow to the already abundantly disgraced edifice of V II. But I do think that it is time to come clean and openly tell the truth about what has happened and why, instead of recurring to verbal gymnastics about what V II was apparently about.

The entire mentality of V II needs to be demolished and those years remembered as years of infamy and crisis the likes of which the Church has possibly never experienced during the course of Her entire existence, not even during the darkest phases of the past.

A critical analysis of “Sacrosantum Concilium” 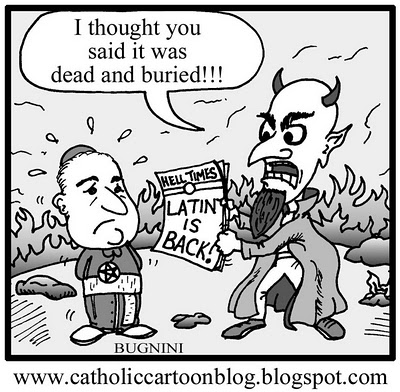 “Rorate Coeli” re-published a brilliant contribution from a member of the American Catholic Lawyers association, Christopher Ferrara. The contribution is longish, but fascinating and even if it has been written some years ago, it still maintains a great deal of actuality.

Mr. Ferrara examines SC with a lawyer’s spectacles, with a view of seeing what SC mandates and what it allows. It seems to be that his detailed analysis has as main aims:

1) to ascertain to what extent the Novus Ordo we know and hate has been authorised by SC;
2) to understand how it could be approved by certainly conservative bishops, in primis by Archbishop Marcel Lefebvre;
3) to see whether the Latin Mass can be restored based on SC, and
4) what is the way forward, if not.

To 1), Mr. Ferrara convincingly proves that every modification originated by the Novus Ordo (and which does not constitute an obvious, liturgical abuse) can easily be justified in the light of SC. He points out (as Romano Amerio before him had often done) to the utterly contradictory mixture of conservative and progressive norms, with solemn statements of the will to preserve tradition immediately followed by the authorisation to proceed to sweeping modification every time that unspecified local needs should be taken into account. This apparent hysteria is, as it is clear now, rather the fruit of the will of Bugnini & Co. to reassure conservative Bishops with solemn statements of continuity of tradition whilst at the same time opening vast portals to utterly unspecified, arbitrarily decided changes by local communities. The strategy obviously worked as the document was approved and the sweeping liturgical modifications introduced in the following years were never seen by both Paul VI and JP II as being against the letter or the spirit of Sacrosanctum Concilium. Ferrara’s case is solidly made: the argument that the Novus Ordo itself (again: leaving aside liturgical abuses) is not in compliance with SC’s norms is untenable. The Novus Ordo we have today is very clearly what was wanted, the fragmentation of the rite into a myriad of different languages and regional variations explicitly desired.

To 2), Ferrara points out to an important psychological, if not legal, factor in the Bishop’s approval. Sacrosanctum Concilium is so structured, that no substantial changes are made mandatory. The picture coming out from the reading is one of a document saying “we want to leave pretty much everything as it is, unless we introduce changes“. The options about changes are, though, so many and so undetermined, that the door to an almost unrecognisable Roman Rite was open wide. We know the results.

A lawyer knows that the dangers in a contract from his client’s perspective lie not so much in what the terms of the contract provide as in what they permit the other party to do. The danger is in the loopholes. Quite simply, SC permits all manner of drastic things to be done to the Roman liturgy. It is one long collection of loopholes. If a lawyer entrusted with the task of protecting the Roman liturgy from harmful innovation had drafted this document, he would be guilty of gross malpractice.

This makes also clear why conservative Bishops like Lefebvre did approve the document. It wouldn’t have been prudent to reject the document altogether in view of its stated conservative character, but it was wise to point out to the dangers to which a mediocre wording would expose the Church. Archbishop Lefebvre actually did both (approving and warning) and in retrospect I would say that his conduct appears – once more – wise.

To 3), the obvious conclusion from what has been said up to now is that the idea that the New Mass is a violation of Sacrosanctum Concilium is untenable. This point seems very important to the author, which leads me to think that years ago the theory must have enjoyed vast popularity. But really, to espouse such a thinking would not only contradict the clear wording of SC (of which Ferrara brings many examples) but would also imply that two Popes have been gravely erring for decades in the interpretation of such an important Conciliar document.

To 4), the author has an interesting perspective. In his eyes, SC should not be modified or specified or guidelines to its interpretations given. Sacrosanctum Concilium deals with the Novus Ordo; it is not a doctrinal statement about how the Mass should look like, but merely a document stating how the mass may be modified. As things stand now, SC has been already implemented or, as Ferrara says in legal terms, has “merged” with the new Mass. Therefore there is, in legal terms, no SC anymore, only the New Mass it generated. As a consequence, the setting aside of the Novus ordo Mass will be the setting aside of Sacrosanctum Concilium. No need for any backpedaling, or modifications, or new interpretations. Just put the NO in the coldest part of the freezer and no further action will be required. Conversely, as SC clearly authorised all the sweeping changes we have experienced, its twisting to let it mean that those changes were never authorised or its modification to let it say the contrary of what it always meant doesn’t really make sense.

Let us conclude with the author’s very reasonable words:

The only way to restrain that mentality and restore liturgical sanity in the Roman Rite is full restoration of our Latin liturgical tradition – taken from us overnight, only 30 years ago.