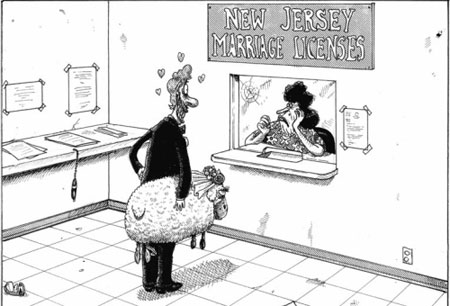 I am rather sure that you have wondered, like me, about how the hysterical screaming of perverts of both sexes for “marriage” (ha!) and “adoption” (ha!) contrasts with the stability of such “unions” (ha!) in real life.

I would have thought (being of gentle disposition; and much less chauvinist than I may sound ; and generally well disposed toward the other sex, and ready to attribute to it all the advantages and accomplishments my own sex hasn’t) that whilst the co-habitation of two sodomites must be hell on earth – with a drama queen factor barely endurable by human nature, and a compound bitchiness rate higher than even perverted natures can live with – the concubinage of two inverted women must be, in its own way, stable; as if the abomination of same sex attraction would not be able to cancel the natural attitude of the gentle sex to cling to one’s companion, to look for stability in a relationship and to exercise those virtues of forgiveness and understanding for the faults of the beloved person that are so rightly considered its natural traits.

It turns out that, whilst the easy prediction about the “marriage” (ha!) behaviour of poofs are confirmed, I clearly overestimated the lesbian part of the equation.

It would appear from here (and please look at the notes for some original sources, further sources will very probably follow) that the exam of perverted “couples” (ha!) in countries where such abominations have a sort of “tradition” (we are talking, of course, of the fortresses of European secularism: Netherlands, Danemark, Norway and Sweden) shows pretty constant results as follows:

1) Marriages between people of opposite sexes (erm: marriages) are the most stable.

2) “Unions” (ha!) between homos have a far higher probability of dissolution than heterosexual ones. This alone should – if common sense were not enough already – put an end to every discussion about “adoption”; but no, it is better for our politicians to utterly wretch young lives, than to risk some votes. Hell awaits, I suppose…

3) “Unions” (ha!) among lesbians are actually – with the only exception of the Netherlands, where readily available pot might be of some help – even less stable than the faggoty ones, with the “ladies” (ha!) actually parting ways like there’s no tomorrow.

This, mind you, in a context of societies where promiscuity is ripe and divorce a common occurrence even among heterosexually oriented people.

What transpires is the extreme childishness, selfishness and utter ridicule of a small bunch of perverts who play with “marriage” and “adoption” as if they were toys seen in a shop window and obtained through senseless and ceaseless crying, but soon discarded after having obtained them. This, note again, not from limited anecdotal evidence, but at collective, multinational level across a couple of decades.

The utterly criminal concept of allowing such small children to even adopt small children has been already examined, and doesn’t need any further explanation.

In their collective behaviour, our perverts’ population shows all the traits the popular wisdom – now branded as “homophobic” but, in fact, purely factual – has always attributed to them.

It is time to throw in the bin of the political correct madness every concept of homosexual “couple” (ha!), let alone “adoption” (ha!).

Comments Off on Failure Of Same-Sex Concubinage Exposed