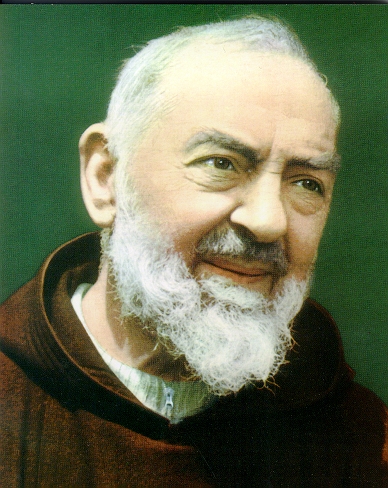 Saint Padre Pio, pray for us!

We are, as you all know, in the middle of the Year of Faith. The way I understand the Year of Faith is that this is a year in which Faith is promoted with particular fervour to react to the growing secularisation of Western societies.

If this is so , it goes without saying the promotion of Faith goes together with the promotion and diffusion of the Truths of faith, as opposed to the error. It should be also not even worth mentioning that errors in matters of sexual depravity should be, in the Year of Faith, be fought against in a particularly virulent way.

Obviously, and as in every human endeavour, words count much less than facts and, in fact, words not accompanied by the relevant facts have in all ages been mocked. Facta, non verba, says a very old adage. Now, most of us must be content with words because they are not in a position of power where they can really act (we can in our small way, of course; but I am not talking about that…). Still, every Bishop can do a lot, and a Pope can, alone, change the face of the Catholic clergy as there is no bishop he cannot remove, no religious order he cannot reform or disband, no crusade he cannot (provided they do not require real tanks) undertake. The Pope is far more powerful than the President of the United States, then he is stopped by none of the checks and balances the latter has to deal with every day. The Pope is, very simply, the person on earth who can act the most, and his responsibility is commensurate to the power entrusted to him, and to the prestige attached to his function.

This is the problem I see with the Holy Father. He proclaims the Year of Faith, and a torrent of very apt words  falls on the world’s Catholics. Still, when it come to facts one notices very fast the Holy Father is, like all his predecessors after Vatican II – with the possible exception of the one who died too early to tell – sorely deficient. Like his predecessors, he makes more the impression of an impotent teacher in a class taken over by unruly children than of a strong headmaster with the school firmly under control.

The suggestion to defuse the matter o so-called same sex marriages by allowing so-called civil partnerships is as perverted as the idea to avoid robberies being made legal by suggesting to decriminalise theft. It is also extremely stupid because our geniuses should find us a country where so-called civil partnerships have been allowed without the cry for “the full monty” becoming deafening in a matter of just a few years.

Are, therefore, our French bishops so unbelievably stupid that they can’t see beyond the door of their residences? Are they so gaga that they do not know anymore what sodomy is, and that it remains such even if there is no state “marriage certificate” to sanction it? O do they have collective Alzheimer’s and do not remember what “scandal” means, and that it is their duty to avoid it to spread, let alone become legal?

The truth is, I am afraid, much simpler. These despicable men have lost the Faith, and their horizon is now strictly limited to what might give them some chance of caving in to the instance of the secular society without appearing too cowardly – if possible; otherwise, who cares… – in the process.

They have, I have told, clearly lost the Faith; then a Bishop who believes in the God of the Christians would never even think of sanctioning legal recognition of sodomy so that there be no legal recognition of sodomy… called marriage. Really, these people are evil, and evil in the most dangerous of ways, because in purest V II style they smuggle their satanic work for Christian charity or political prudence, like a closet Communist would suggest you submit to a new Brezhnev to avoid the return of Stalinism.

Padre Pio would roll in his grave.

What does, then, the Pope, who has not only the power but the duty to neutralise these people, do to protect the faith in… the Year of Faith? Has he forced anyone to retract? Has he removed any of them? How many of them are, in fact, his own appointments? The answer is: nothing. He has done nothing, he is doing nothing, he will do nothing. As long as he reigns, bishops will continue to undermine Catholicism everytime they feel they have some advantage to gain from so doing and remain unpunished. They have nothing to fear. They know it, and he knows it too.

Mind, it is not that the Holy Father cannot talk. His Christmas address concerning the fact one cannot choose his “gender” was beautiful. But if a Pope talks and refuses to act, he is betraying at least half of his office, and will be justly remembered like another Paul VI who had a clear vision of what was happening, but did not have the guts to be Pope.

Another two or three well-sounding and ineffective Popes like this one, and we will be persecuted in the public square.

Comments Off on Sodomarriage: French Bishops Shame The Church