Nothing Compares To Exodus 20:5, Or: Sinead O’Connor, A Cautionary Tale.

Thou shalt not bow down thyself to them, nor serve them: for I the Lord thy God am a jealous God, visiting the iniquity of the fathers upon the children unto the third and fourth generation of them that hate me;

The sad news is now everywhere, that the son of Sinead O’Connor committed suicide at 17.

Whilst it is fairly obvious what the likely destination of the young man is (two other attempted suicides in the last weeks. Do not deceive yourself: either he was completely bonkers, or Satan was strong with him), I think a prayer is in order. God has judged him according to His Goodness. We still hope that he made it, some way, to the right side of the Great Divide. We hope, by the way, the same for Sinead O’Connor. As always, God’s will be done.

So, let us see what hand the young boy had been handed.

He was born of a vocal lesbian, a pot addict, a woman unable to relate to others in any meaningful way, unstable to the utmost but still managing to put four children into the world. A sort of woman-child, if you would call her a woman. But boy, such a loud one… He was, also, born of a woman who famously tore up a picture on JP II on TV in a blatant attempt to criminalise the entire Catholic Church (and, by reflection, Catholicism) for an issue common to most complex organisations, like the teachers, or the so-called Church of England. However, the likes of O’Connor would refuse to see it. Why would she, you might ask?

If you ask me, because she was a pot-smoking pervert taking pride in calling herself a “dyke”, asking three popes to be excommunicated, taking pride in being made a mickey-mouse priest, changing her name because it is connected to “the patriarcheeee”, then changing it again when she apostatised (of all the bonkers acts of this human wreck, certainly the worst one). Just as an aside, she then informed us that she finds every non-muslim “disgusting” and that conversion to Mohammedanism is “the natural conclusion of any intelligent theologian’s journey”; which, coming from such an oracle, should really give food for thoughts. The one who first says that even in her pot-ravaged state still believed in the Most Holy Trinity and then proceeds to deny the same Most Holy Trinity is, apparently, the smart one. We are, however, all stupid. Oh, and disgusting, too.

And then there are the constant about-faces. Be it Prince, or Christians, she is always ready to recant what she once shouted; but, somehow, she never seems to stop shouting.

Well, it seems that God has some very harsh news for this woman: the sins of the mothers shall be visited upon the sons. Whilst it would be unfair to blame her directly for an act for which the responsibility must rely on the one who made it, she cannot call herself innocent of this immense tragedy, as it is difficult not to conclude that being the son of such a clown and growing up a normal adult is not an easy job at all.

The phrase did not require any special divinatory quality, as the woman has been on a path to self-destruction for many years; one that was, and is, as evident as it is shouted.

Almost ten years after that blog post, things have come to a very, very bad end indeed; but this has not involved her directly, but a young man she should have nurtured, protected, and helped to grow up a responsible adult with – because this is her obligation, whatever her character – the fear of the Lord.

Among the many delirious things this woman can never stop spouting is the belief that God sends everyone to heaven. I don’t think I am the only one reflecting that this is the stuff out of which suicides are made. These people work on their own tragedies every waking hour. Still, I am sure she will blame someone else for it, too. The Patriarchy, perhaps? Or the Church?

Rabidly anti-Catholic. Lesbian (let me quote: “dyke”). Pot addict for decades. Wannabe priestess. Apostate. Insulting of all followers of Christ. Am I the only one who thinks that the tragedy that has just unfolded is a huge cautionary tale, or a kind of 2+2=4 for the use of every Christian?

O’Connor has managed to share, not directly but certainly as a parent, clear responsibility for the self-destruction and very probable damnation of her own son. As in this little space we don’t do fake kindness (which would be uncharitable), and as it will be extremely difficult to find shepherds willing to do what, fifty years ago, would have been thundered from every pulpit ( that is: the use of this episode as a cautionary tale for the sheep), I think that it behooves little efforts like this one to encourage you to say, in your charity (let us say it once again) a prayer for the young man and for his mother, but to also point out very forcefully that this is what comes out of being Sinead O’Connor for an entire lifetime, and no, picking a new name every three month will not change anything, either.

I wish it weren’t that way. I wish that I lived in solidly Catholic times, where one can rely that the message will be relayed to the sheep promptly and forcefully. As things stand, I dread the amount of sugary your-son-is-now-with-the-angels-ism and other similar lies that might be propagated by laymen and priests, possibly even by bishops. When it is about looking good, I see it far too often that Christ becomes an afterthought, when He is considered at all.

Before I go, let me clear the air with some conciliatory, soft, soothing, charitable considerations:

Nothing Compares To Your Idiocy: Sinead O’Connor. 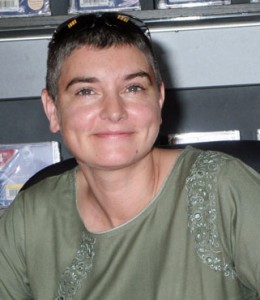 The boy needs to grow up a bit.

One of the most salient traits of modern society is the fact that people claim – and are given – credibility just because they happen to be famous.

A beautiful example of this is Sinead O’Connor. I can’t imagine any other age in which an unstable lesbian with rather hysteric ideas, a penchant for suicide and in general rather fit for a specialised establishment for mental illnesses can ordain herself – or be ordained by some other clown – a “priestess” and be taken seriously. In every other age, people would say to her “yes, dear” and care that there are no knives lying about.

Not with this lady (boy?), though. We are here in front of a person who married four times – showing an admirable ability to stick to her own decisions – threw in some lesbianism just for the fun of it, and made other rather extraordinary things like tearing a photo of the Pope, “the real enemy” (of unrepentant lesbians, yes!), and rant about child abuse as if it was something the Church specialise in. Which is very funny, because in order to see a prime example of sexual perversion she needs to do no more than look at the mirror.

Is it a surprise that such egomaniacal people should twitter around that they need sex, or that they feel suicidal and need a doctor and ask tweeters to find her – a rich woman with access to the best of the best – one; or marry the same person they divorce a couple of weeks later? Come on,  who would take such people seriously in real life?  The lady (boy?) should go back to kindergarten and seriously start working on becoming a halfway responsible adult instead of the whining, passive-aggressive, manipulative lesbian bitch she is.

“Oh, but she, oh, has, oh, bi-po-lar, oh, di-sor-der”, I hear (the usual) people say. Bipolar disorder, my foot. If you know you’re unstable, don’t behave unstably in public. If you can’t avoid behaving unstably in public, you are ripe for the above mentioned specialised structures.

But no: this pervert, never grown prepubescent cretin will continue to make pathetic headlines with every anti-Catholic rant whilst the usual idiots will continue not only to justify whatever she does, but to continue to see in such example of self-centred immaturity or outright stupidity and perversion some kind of guiding light for their own agenda.