Reflections On The Modern Times

I read around an appeal to getting rid of one's TV set in order to avoid exposure to the abominations of our times, now represented in growing measure even in mainstream programmes like, say, the Grammys.

Allow me to say why I disagree.

Firstly, I would say that if it is undeniably true that the TV set can be the source of inappropriate or outright perverted content, this is the more true for the Internet, which makes filth of all kind far more easily available, around the clock to boot. If, therefore, I had to throw away my TV set, I would have to get rid of my Internet connection first. Which would be unusual, since I write a blog and rely on the Internet access of other people to be read, and on mine to run a blog in the first place.

Secondly, I have no qualms with the TV set, but I do rarely watch TV these days. The fact is, a TV set can be used to watch perfectly fine DVDs, play video games, watch learning material, and so on, providing countless hours of perfectly innocent entertainment or even useful education. What about my dear collection of Walt Disney Classics, then? No Cinderella, Snow White or 101 Dalmatians anymore? No “Passion of the Christ” during Holy Week? No history documentaries? No football, cricket, Formula 1, you name it? An Italian who doesn't watch at least a bit of football should have his citizenship revoked. Well, you know what I mean.

Thirdly, the argument reminds me of those who want to ban weapons, because “weapons kill”. No they don't. Humans kill. How many knives do you have in the kitchen? How about that meat cleaver? Should we ban it, too?

“Ah”, you will say, “this is all fine in itself; but then it is so easy for the wrong content to creep in!”. Look, it is life that makes the wrong content creep in, and it is much better to teach one's child – and oneself – to look for the right content and have the right frame of mind, than trying an escape from a reality of modern filth that will never succeed anyway.

In London, Stonewall regularly has ads put on the underground and on buses. No child can escape them, and it makes no sense to try to protect the young from the reality of filth. Politicians talk of sexual perversion all the time, and their words are reported by radio and newspapers, even in the morning.

No radio, then? No newspapers?

Speaking of children: at some point, the child will ask anyway what “same sex marriage” or “homophobia” are supposed to mean, and then you'll have to give an answer or your child's liberal teacher will give it for you, earlier in life than you can imagine. Far better, then, to have this child in front of the TV set watching the “passion of the Christ”, or the DVD about the Tridentine Mass, or a documentary about the Roman Empire, or a game of Chelsea FC come to that.

This, of course, presupposes control. But it has always been this way. As I was a child, my parents decided if and how long I could sit in front of the TV set, to the minute. There is no reason whatever this should not be done now. If one hasn't the time to properly supervise the children, the problem is that he cannot supervise his children, not the TV set.

We can't shut ourselves, or our loved ones, out of life. Life will enter our and their world anyway. Rather, use the TV set, the Internet, the radio and whatever will come in future as an instrument to make this world cleaner and better for you and them, and to live a better life.

You are, in fact, doing it just now, as you are using the Internet to read a Catholic blog.

The TV set isn't a pervert. Perverts are.

Three Cheers For Cardinal O’Brien, Christian Of The Year! 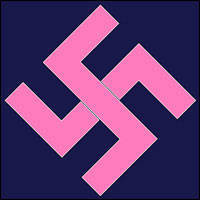 The pervert organisation “Stonewall” has honoured Cardinal O’Brien with the “Bigot of the Year” award, as EF Pastor Emeritus reports.

I invite all right-thinking readers of this blog to join me in my congratulations to the Cardinal for this well-deserved achievement. I cannot imagine a more telling evidence of his Christian spirit, and will to fight the good fight in the face of perverted bigotry.

His Grace will be proud, no doubt.

Perhaps the day will come when even simple bloggers – like yours truly – will be able to aspire to such high honours. For the moment, the prize seems to be the monopoly of high-profile figures. I also hope that in the coming years, Catholic personalities will monopolise this prize.

Well done, Your Grace! Your colleague Vincent “Quisling” Nichols certainly does not run any risk of winning such an award!