We Cry For You, Argentina! 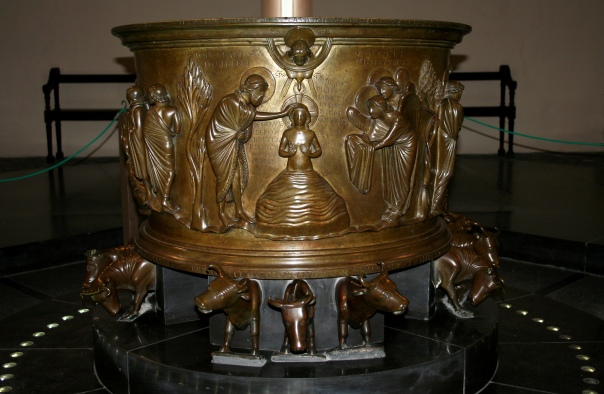 In the land of boorish populism, Pinocchio masses and Tango masses,  (you will see a familiar face in both I am afraid) it was only a matter of time before this here happened: two lesbians having their own child baptised and being confirmed themselves.

Now, I have already written about the fact that a priest is supposed to baptise if, and only if, he thinks that the child has a reasonable, well-grounded hope to be raised in the Catholic faith. Say, two Jews are thinking of conversion, but they want their offspring to be baptised and raised as Catholics in the meantime. I never got a problem with the fact that Felix Mendelssohn and his siblings were all baptised before their parents converted to Christianity. In that case, it made sense to do so, and there was more than solid ground to believe the children would be raised in the Christian (if, alas, not Catholic) faith. But this here is beyond belief.

Firstly, one must ask how well grounded is the chance that a child will be raised in the Catholic faith if the people he lives with are the very epitome, and very publicly so, of all that the Church opposes. This is as if Stalin would have asked for his son to be baptised; with the difference that in Stalin’s case one might have hoped the mother of a child was a closet Christian; no risk of the sort here.

There isn’t much to say here: this is how the Church of Bergoglio sanctions abominations under the disguise of “mercy” at all costs; only in isolated cases at the beginning, and more and more frequently in future, so that if this disgraceful papacy is allowed to continue it is not at all unthinkable that in five or ten years time such exercises will be the norm, and every fag and dyke in the land will feel authorised to be extremely incensed should a priest deny the baptism to the child, or the confirmation to them.

For the record: I think such a baptism is madness. It would be a madness even if the godfathers were Catholics of unimpeachable credentials; but in this case the godparents seem to be friends of the “family”, so they are perverts by association, full stop. That one of them is supposed to be Ms Kirchner already says it all about what is going on here.

The sacraments only have sense if they are given in conformity to the sense and function they have. If everyone should be baptised just because he is born, then I wonder why Francis does not proceed to a declaration of Automatic Universal Baptism of All The Unbelievers In The World Upon Birth and be done with it. At that point, you can give communion to every public adulterer because of the hope some sacramental grace may flow from the desire of the adulterer to receive communion, and give give the sacrament of confirmation to, say, avowed lesbians (I know, it’s absurd; just making a point here… I hope…AAARRRGGHHH!!!)

You will say: “but Mundabor, this is not how it works. You just can’t give baptism automatically to everyone”.

I know, it’s not how it works.

Exactly this is the point.

The question whether he “fosters adoration” was taken very seriously by those present.

From Rorate Caeli: emphases theirs.

“But, I think – I say this humbly – that maybe we Christians have lost a little the sense of adoration, and we think: we go to the Temple, we come together as brothers – that’s good, it’s great! – but this is where God is. And we worship God.”

What about the Pinocchio Mass, for example? Does it foster adoration?

Or perhaps is the Tango Mass more in tune with God’s dwelling place?

What about, for example, openly admitting past mistakes (so that they can never be used as excuses for other liturgical wreckovations) and crushing down very hard on the abominations happening all over the West?

I seem to detect a certain dissonance between words and facts, and you know which ones speak louder.

Keep praying for Francis; that he may, one day, always practice what he, at times, preaches.

After the Pinocchio Mass, another document emerges that will condemn the disgrace called Jorge Bergoglio to shame for all centuries to come.

Look at the video below and tell me which one of you, confronted with such a sacrilege, would not cry scandal and declare the priest responsible for such an impiety, and everyone willingly involved in the preparation and execution of such a monstrosity, either extremely stupid and utterly deluded, or else positively evil.

I do not need to call as witness St Pius X or Leo XIII. This is not merely an inappropriate event that can be spotted only by the trained eyes of a liturgist. Far from that.

Ask yourself whether one Argentinian prostitute, even only one of them, of one hundred years ago and with a minimum, a mere trace of fear of The Lord would have condoned a Post-communion Tango at Mass; just in front of the altar; two and a half meter from the Crucifix; practically in the shadow of a statue of Christ; not only in church, but in the very sanctuary.

How can one look at this obscene spectacle and not think that those responsible for it are fully, fully in the hands of Satan; either because blinded by their own pride of “church reformers”, or else because positively devoted to the destruction of what they know is holy.

The man who presided over all this – and no, I do not care a straw about whether he planned it, or wanted it: he allowed it, so he is responsible – wasn’t a stupid parish priest. He was an extremely blinded, or extremely evil, Archbishop and Cardinal.

This very man has become the Pope. Clearly, God in His mercy has allowed (not willed) this vulgar, shameless man to be elected so that even the most stupid among the sheep may finally come to their senses and see the madness of Vatican II and the resulting, utterly wordly “pacification theology” that comes with it.

You can only side with Christ or with the world, there is no alternative. The stupid (or evil) mentality of this extremely dangerous, subversive man becomes extremely evident whenever he tries to pacify the enemies – the Church and the world -, thus creating a clash of worlds that can only produce desecration, heresy and blasphemy. This clash is so evident that not to be scandalised at even thinking of what you see in this video requires an advanced degree of blindness and the prideful perversion of every concept of Christianity; or, alternatively, a cold-blooded, calculated intent to damage Holy Mother Church as much as one can.

Let us say it again, because there are things that must be said: it is reasonable to think that every Argentine prostitute of one hundred years ago, if provided with a minimum of fear of the Lord, would have shuddered at the mere idea of such a spectacle as you can see in the video. Jorge Bergoglio, the oh so modest Bishop of Rome, is obviously below such a level of morality, and I do not doubt he would call it “moralism”, or “ideology”. Lex Orandi, Lex Credendi. Francis is the best example of this, and his Lex Credendi is perfectly in tune with his Lex Orandi.

God is now clearly smashing our post V II stupidity in front of our eyes, so that even the most deluded Pollyannas can see, or have no excuses if they refuse to do it.

Open your eyes and see the evil in the face; that you may, by much prayer and penance, avoid sharing the destiny of those among these fools who will die in their prideful delusion.

Or ignore the evidence at your peril.

The sacrilege is posted on top. The Tango begins at around 26:35. Persuade yourself of the future Bishop of Rome being fully a part of this sacrilege. It’s a real Mass; homily, Holy Communion and the rest.

The two are dancing the Tango after Mass. In the sanctuary. In front of Jorge Bergoglio.