The Soi-Disant Christian And The Trinity

You hear nowadays people everywhere who – even when they call themselves Christians, or Catholics – have an awful lot of things to say about what the Church gets wrong, or Christianity (very mysteriously) never got right until this generation.

You never see them questioning the Trinity.

This is very strange, thinks yours truly. If there is one thing that sounds absurd and impossible to explain to the piercingly inquisitive mind of the modern soi-disant Christian it is… exactly the Trinity! Still, all those people who need to improve on perfectly traditional teaching like the ones on sexuality in general, abortion, divorce, sexual perversion, and the like, never feel the need to improve on this (seemingly) most absurd of teachings.

The fact is – thinks yours truly – that the belief in the Trinity does not require any sacrifice for the the soi-disant Christian. It is not uncomfortable to him. He can live with it admirably well, without it having a massive impact on his life.

Contraception, fornication, abortion, and the newly discovered fashionable fondness for his “gay friends” are a different matter altogether. They impact his life, now! They demand that he alters his whole way of thinking and acting in matters impinging his daily life!

And so it happens that our modern thinker, who prides in his oh so rational dissection of Christian thinking, fails to criticise what, if he were really a rational critic of Christianity, he should criticise first.

This is absurd. If the “modern Christian” accepts the Trinity, he accepts the very concept of Revealed Truth in its most evident form. Our acceptance of truths we do not understand truly begins with our acceptance of the concept that we believe one God we cannot even fathom. In accepting this, we accept the very concept of Truth that we receive without questioning it.

It is, therefore, incoherent that anyone who accepts the concept of received truth in its very foundation would then proceed to question parts of the building erected on this very concept. No one can say that he accept God’s Truth concerning His own nature, but refuses to accept God’s Truth concerning other matters, without sounding like a child who should be sent to bed before he keeps saying more stupidities.

But again, the “critical Christian” in question does not see this blatant contradiction. He is happy with words like “theology of love”, and eager to tell you all the Church has to change in language, attitude, even teaching, in order to conform to some strange fantasy god of his who, evidently, has not been able to tell us how things are up to now. That such a fantasy deity would be such an abject failure that he does not qualify I do not say as god, but as kindergarten teacher, our inquisitive mind clearly does not realise.

Mind, though: soi-disant Christian has nothing against calling this strange fantasy god of his a Trinity.

This does not stand in the way of his fornicating, contracepting, aborting, or sodomising.

At the cost of stating the obvious, I will point out that feasts like this one (or like Corpus Domini, or the feast of Christ the King) are there to put certain fundamental aspects of Christianity and Catholicism very forcibly in front of the faithful. The Holy Trinity is, clearly, indispensable component of every Christian thinking.

Still, one wonders how the message can get through, be interiorised and really made their own by the faithful, if the same Trinity is downplayed by the same Not-very-holy Father.

To say that Mohammedans believe in the same God as Christians is to deny the Trinity. To think that Jews do not need to believe in it to be saved is to deny it in a more subtle way.

Francis clearly baptises in the name of the Priest, the Imam and the Rabbi. To him, it's all pretty much the same, and the Trinity is rather an afterthought, something Catholics happen to believe, but which should not be seen as an indispensable component to try to understand God.

The relentless effort to make Christianity acceptable to non-Christians unavoidably creates a mish-mash of blasphemies, errors and utter stupidity that must be unacceptable to Christ, if Christ's words have to have a meaning and a purpose.

The result of this madness is a “one-world” religion… without the Trinity. But hey, we don't want such small details to get in the way of the understanding among the peoples, or the understanding between the Pope and his best buddy.

Soon the time will come when the Trinity, the Transubstation, and all other Christian or Catholic specific traits will be utterly ignored, or treated as an innocent quirk of the “One religion”. We are OK, but they are OK too. We have our own way and they have theirs. Proselytism is a solemn nonsense. Convert the other? No, no, no!

Therefore, today we celebrate the feast of the Holy Trinity; which, if what Francis says has some sense, means to him the celebration of an optional belief Catholics seem very attached to, but not an indispensable component of the belief in the One World God.

The Feast Of Corpus Domini

The feast of  Corpus Domini (officially in English Speaking countries the “Solemnity of the Most Holy Body And Blood Of The Lord”) is a traditional Catholic solemnity instituted to celebrate the Real Presence consecrated in the Eucharist and celebrated on the Thursday after Trinity Sunday, that is: tomorrow. Corpus Domini is simply the Latin for “Lord’s Body”.

The origin of the feast lies in the vision of an Augustinian Nun, Juliana of Liege. This nun had always had a special veneration for the Blessed Sacrament, desiring to be in His presence for as long as possible.  According to Wikipedia:

This desire is said to have been increased by a vision of the Church under the appearance of the full moon having one dark spot, which signified the absence of such a solemnity. In 1208 she reported her first vision of Christ in which she was instructed to plead for the institution of the feast of Corpus Christi. The vision was repeated for the next 20 years but she kept it a secret. When she eventually relayed it to her confessor, he relayed it to the bishop. Juliana also petitioned the learned Dominican Hugh of St-Cher, Jacques Pantaléon (Archdeacon of Liège who later became Pope Urban IV) and Robert de Thorete, Bishop of Liège. At that time bishops could order feasts in their dioceses, so in 1246 Bishop Robert convened a synod and ordered a celebration of Corpus Christi to be held each year thereafter.

It is interesting to note that when the Church made of this a universal feast, St. Thomas Aquinas composed an ad hoc hymn, the Pange Lingua, which became one of the most famous hymns of the Church. The last two verses of the hymn gave origin to another famous hymn, the Tantum Ergo.

There is no doubt that this feast reached a high degree of popular participation in the centuries before the Heresies of Luther & Co., as proved by the lengthy controversy in Florence about whether the Corpus Domini procession should start from the newly erected Cathedral of Santa Maria del Fiore, or rather from its traditional location of the Dominican church of Santa Maria Novella. We also know that when the heresy of Calvin started to spread, particular caution had to be exercised to ensure adequate protection for the Precious Body, traditionally led in procession in a monstrance and now at risk of desecration through the heretical mob.

I also read several years ago in Germany – and have no ground to doubt – that this feast received additional impulse during the Counter-reformation, as the fact that the feast so obviously stresses the Real Presence and the miracle of Consecration made it very apt to be used as a vehicle of sound Catholic doctrine amidst the heretical impulses of those times.

The feast is not a holy day of obligation in the United Kingdom and has been moved to the following Sunday. Still, it would be good to try to go to Mass tomorrow if you can, or at least to find some time to stay in the presence of the Corpus Domini on the day of this beautiful, so intrinsically Catholic feast.

Comments Off on The Feast Of Corpus Domini

Prayer Appeal For The FSSPX 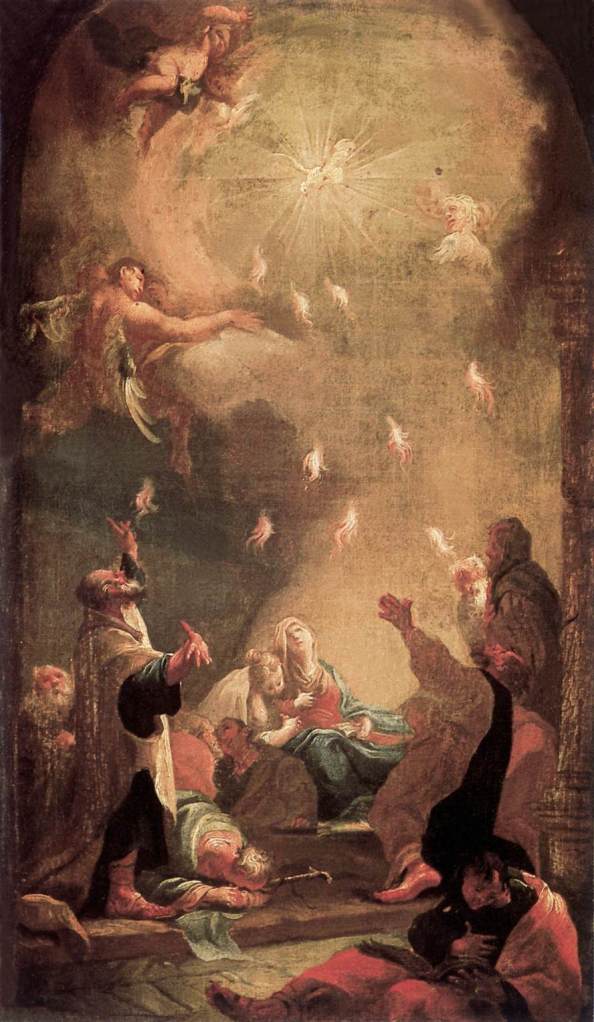 Messa In Latino invites the faithful Catholics to pray for the full reconciliation between the FSSPX and Rome.

After consultation with priests collaborating with the site, the following prayer has been published:

V. Come, Holy Ghost,
R. Fill the heart of your faithful, and kindle in them the fire of your love;
V. Send your Spirit, and it will be a new creation;
R. And you will renovate the face of the earth.

Let us pray
O Lord, who with the light of the Holy Ghost instruct the faithful, grant us to taste, through the same Spirit, what is right* and to always enjoy His comfort. For Christ our Lord. Amen.

The prayer should be recited between Pentecost Sunday and Trinity Sunday.

Those who recite the Rosary daily are asked to offer the rosary for this intention.

Priests are asked to add this to their intention during Mass.

* the site’s italian translation of recta is given with “la vera sapienza”, “the true wisdom”.