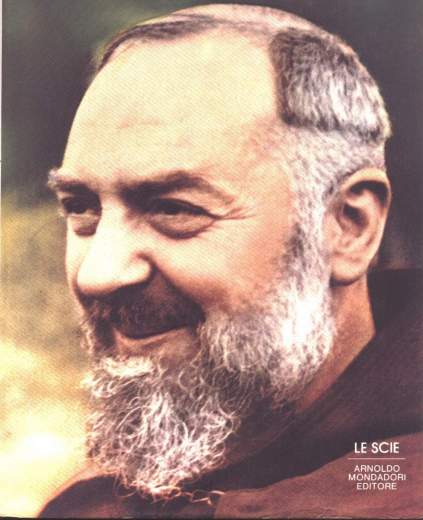 He understands our suffering and our anger: Padre Pio.

From the Canadian Site of the SSPX ( I wonder how long until they will be outlawed in Canada, for “hate crime”).

He was a model of respect and submission towards his religious and ecclesiastical superiors, especially during the time when he was persecuted. Nonetheless, he could not remain silent over a deviation that was baneful to the Church. Even before the end of the Council, in February 1965, someone announced to him that soon he would have to celebrate the Mass according to a new rite, ad experimentum, in the vernacular, which had been devised by a conciliar liturgical commission in order to respond to the aspirations of modern man. Immediately, even before seeing the text, he wrote to Paul VI to ask him to be dispensed from the liturgical experiment, and to be able to continue to celebrate the Mass of Saint Pius V. When Cardinal Bacci came to see him in order to bring the authorization, Padre Pio let a complaint escape in the presence of the Pope’s messenger: “For pity sake, end the Council quickly.”

The same year, during the conciliar euphoria that was promising a new springtime to the Church, he confided to one of his spiritual sons: “In this time of darkness, let us pray. Let us do penance for the elect”; and especially for the one who has to be their shepherd here below: All his life, he immolated himself for the reigning pope, whose photograph was among the rare images that decorated his cell.

There are other scenes from his life that are full of meaning, for example, his reactions to theaggiornamento of the religious orders concocted in the wake of Vatican II. (The citations here are taken from a book bearing an imprimatur):

In 1966, the Father General [of the Franciscans] came to Rome prior to the special Chapter on the Constitutions in order to ask Padre Pio for his prayers and benedictions. He met Padre Pio in the cloister. “Padre, I came to recommend to your prayers the special chapter for the new Constitutions…” He had scarcely gotten the words “special Chapter”…”new Constitutions” out of his mouth when Padre Pio made a violent gesture and cried out: “That is all nothing but destructive nonsense.” “But Padre, after all, there is the younger generation to take into account…the youth evolve after their own fashion… there are new demands…” “The only thing missing is mind and heart, that’s all, understanding and love.” Then he proceeded to his cell, did a half-turn, and pointed his finger, saying: “We must not denature ourselves, we must not denature ourselves! At the Lord’s judgment, Saint Francis will not recognize us as his sons!”

A year later, the same scene was repeated for the aggiornamento of the Capuchins:

One day, some confreres were discussing with the Father Definiteur General [The counselor or adviser to the general or provincial of a religious order –Ed.] the problems in the Order, when Padre Pio, taking a shocked attitude, cried out, with a distant look in his eye: “What in the world are you up to in Rome? What are you scheming? You even want to change the Rule of Saint Francis!”The Definiteur replied: “Padre, changes are being proposed because the youth don’t want to have anything to do with the tonsure, the habit, bare feet….”

If we consider that Padre Pio was a veritable alter Christus, that his entire person, body and soul, was as perfectly conformed as possible to that of Jesus Christ, his stark refusal to accept the Novus Ordo and the aggiornamento should be for us a lesson to learn. It is also noteworthy that the good Lord desired to recall His faithful servant just before they were implacably imposed on the Church and the Capuchin Order. Noteworthy, too, is the fact that Katarina Tangari, one of Padre Pio’s most privileged spiritual daughters, so admirably supported the priests [of the Society of Saint Pius X] of Ecône until her death, one year after the episcopal consecrations of 1988.

Those who have read other books about this greatest of saints will recognise without difficulties the traits who make Padre Pio not only so saintly, but so lovable: the emotional outbursts, the extremely strong language, the hate for every compromise with what “people want” rather than what they ought to do. “Chase them out! Chase them out!”.

If you have ever seen an Italian accalorarsi about a controversial issue, you will have a picture in front of you as true as life.

I remember reading that he prayed the Lord – and said so openly – to be allowed to die before he had to celebrate the new Mass. The exemption, by the way, was not conceded so automatically as the text might imply, but was given to him as to all the old priests who asked to be exempted because too old to learn the new, complex missal. Padre Pio was also exempted and the Lord allowed him, after a life of suffering, to be spared this last crushing sacrifice. But he died a very worried man, greatly fearing the damage the new madness would inflict to the Church and to countless souls.

In these dark days, it should be a consolation for us to reflect that such a great saint shared our suffering – nay, he certainly felt it much more keenly – and, for those of Italian inclinations among you, our anger.

San Padre Pio, pray for us!

Cardinal Woelki, another gift of Pope Benedict to the Church.

The appointment of Archbishop Mueller to the CDF was the signal for the Modernist troops to start an attack in defence of the money they cash from the not-so-faithful in Germany, Austria and Switzerland.

This time, the openly heretical assertions come fromt he youngest Cardinal, Woelki, an appointment of Pope Benedict both as Archbishop and Cardinal.

Woelki, whose diocese lies in Berlin (last time I looked, the city in Europe with most lesbians compared to the population), is reported by the Tablet as follows

Commenting on gay men in relationships he said he tried not to see them as just violating natural law but as people trying to take responsibility for each other in lasting partnerships. “We must find a way of allowing people to live without going against church teaching,” he said.

I do not know whether the Cardinal really said (the Tablet might have twisted his real words) about perverts “trying to take responsibility”, which is as intelligent and as Christian as to say that a paedophile is trying to take responsibility for the child he rapes, or a zoophile for the dog he screws. I do not doubt the Cardinal’s concept, as truly expressed, were alarming  enough. But the words literally quoted are  of the same heretic content: in the view of the Cardinal, it is not people who have to conform their actions to church teaching, but the church teaching which must be conformed to their actions; they can, otherwise, evidently “not live”.

This is another brilliant appointment of Pope Benedict. This man will contribute to the election of the new Pope. The Vatican – this man is a Cardinal, remember – is rapidly becoming a theological madhouse, with particularly the German prelates doing whatever they can in order not to lose the money of the Kirchensteuer, which makes of the German church the wealthiest on the planet.

I sincerely hope the Cardinal (who according to Wikipedia had a rather good start as Archbishop, saying that homosexual acts are against the order of creation: which is obvious, but in these times not automatically said) will now correct the “Tablet” and either point out to their mistake and interpretation errors, or else make it very clear that he is true to the line. Possibly without V -II quibbles and explanations as to how freedom is slavery, and war is peace.

Otherwise… otherwise, what? Can you imagine Archbishop Mueller really forcing this man to orthodoxy? Really?

It may well be that Pope Benedict has plunged us in the most serious crisis in the history of the church.  This new phase of the crisis might develop with assorted – mainly German-speaking – Cardinals expressing themselves in the usual duplicitous, slimy way – see above – against every Church rule and doctrine staying between them and the money of their poor sheep. The Vatican would, then, do  nothing beyond the usual feeble meowing every now and then, in order to hide behind the fig leaf of pretended orthodoxy whilst allowing the German (and other) Cardinals to be perceived to be “modern” and “on the side of the people” by their sugar daddies.

The Holy Father will in the meantime, no doubt, work on his next book.