Vatican Speaker Lombardi said there will be no “dialogue” with the Austrian heretics. This is, says Lombardi, a pastoral problem, and as such must be dealt with by the competent authority, the local bishops.

Firstly, I do not think the doctor has ever ordered one must “dialogue” with people whose positions are so shamelessly heretical. Still, it seems nowadays without offering “dialogue” one doesn’t go anywhere, and simply defending Catholicism by disciplining those who injure it is someway not in fashion anymore, or “sensitive” enough. Some one must dialogue with the heretics, says Lombardi. Of course he must. Merely, it won’t be Rome.

Secondly, this intervention it is truly indicative of how excruciatingly slow (others would say: ineffective, and inefficient) the Church’s workings are. An open heresy explodes. The local authorities do pretty much nothing for now nine months. The Vatican says the local authorities must deal with the problem. Only, the problem is clearly not dealt with, nor does the Vatican deal with the fact that it is isn’t.

In short, it would seem that talking is seen as a legitimate substitute for acting. In the meantime, the heresy goes on, the appeal to disobedience is still on the internet, and there are rumblings in Germany and Ireland.

Brace yourself for some more talk. Possibly even “dialogue”.

LCWR’s “Theology” And The Licence To Bark 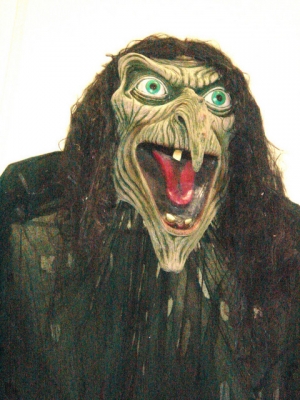 She was angry at the Vatican.

On the “God and the machine” blog (yes, I know: he writes on Patheos) we find an interesting article describing the self-made theology of Barbara Max Hubbard. The lady would be, to us, totally irrelevant as one of those ridiculous new-age-cum-gandhi charlatans going around, but unfortunately she is not, because she was invited to talk at the LCWR annual conference, in which apparently – and unsurprisingly – such plainly heretical/heathenish talk found a great echo.

The inconsequential bollocks she dishes to her listeners is best described with the words of Philip Neri at the Domine, da mihi hanc aquam blog: “I would add a few descriptive words myself, but I might die in my sleep unabsolved of serious sin”.

I am not surprised that people able to tell themselves nuns and to encourage such blasphemy have the gut to complain because they have been corrected. The old witches have not been punished nearly as harshly as they have richly deserved. Therefore, they can now bark as loud as they can without fear of exemplary punishment.

Once again, I have the impression the approach used with the, erm, ladies was far too mild. They will  only do what is absolutely necessary to avoid worse measures – I can’t imagine it to be much;  some soon-forgotten reiteration of fidelity to Church teaching should do -, after which they’ll probably continue their work more or less undisturbed. Who is, I ask, going to stop them? The Vatican? How so, if years of unashamed paganism has led to nothing more than a gentle rebuke and slow “help” to clean up the shop a bit in the next, what was it, five years?

The reaction to the conclusion of the apostolic visitation shows it doesn’t make sense to be mild in these matters. The liberals bark exactly as loud, the witches remain as unrepentant as they were before. An exemplary punishment (as in: choice between abiura or excommunication for the leaders; suppression of the entire LCWR; suppression of the worst of the religious orders member of the LCWR) would have silenced “progressive” “Catholics” the world over and sent a clear message the party is now at an end, and such antics will not be tolerated.

Alas, it is in the style of this pontificate to be always in the middle of everything: half supporter of traditional liturgy, half of the neocatechumenal way; half commander-in-chief, half encouraging uncle; harsh in words against dissent, but far too mild in action.

Make no mistake: dissent will continue unabated, and will perhaps be emboldened by the absence of exemplary measures.

They all know now they still have licence to bark.

Mr. Crow exposes in just a few lines the falseness and hypocrisy of Socialism (in one of his milder forms) masked as Catholicism. The socialist attitude betrays the mistrust in human charity, and the belief in the inherent evil of human nature, that is so typical of the ideology. The socialist believes that if it wasn’t for the public hand, people would starve on the streets. How very unchristian.

I have written about the matter in the past, but I am far away from possessing the admirable conciseness of Mr Crowe.

The rhetorical question is : “what anti-poverty programs would Jesus cut?” Now, you could read a 1000-words answer from me to this extremely cretinous statement or, more practically, you can read this:

one potential serious answer would be, “Well, none. Jesus wouldn’t cut a single program.”…