Far too weak a reaction if you ask me, but at least they are moving. If you click on the their website, you find the matter dominates the homepage.

Below is the official briefing, unfortunately available only as .pdf and I hope the link works.

What is happening now shoul dhave strated months ago, as soon as cameron announced his evil plans.

What should be happening now is Cameron & Co. being scared witless after months of barrage from the pulpits, the radios, the newspapers.

Call Cameron a minion of Satan every Sunday, and even the BBC will notice.

Still it’s not too late.

Saint Michael the Archangel,
defend us in battle;
be our protection against the wickedness and snares of the devil.
May God rebuke him, we humbly pray:
and do thou, O Prince of the heavenly host,
by the power of God,
thrust into hell Satan and all the evil spirits
who prowl about the world seeking the ruin of souls.
Amen

Comments Off on So-Called Same-Sex Marriage: The Briefing Of the UK & Wales Bishops’ Conference

This is a very interesting reading, and the “Coalition for Marriage” position concerning the law to be discussed next week.

If you read through the document you will notice several interesting considerations, too numerous for me to report here rather than suggesting that you read the document.

Watch for what is happening in the Netherlands and Mexico, though.

Confession To An SSPX Priest?

There is a truly beautiful post on Father Z’s blog about the validity of confession from an SSPX priest. You already know yours truly is a great fan of the organisation, and considers them better Catholics than your average Cardinal (let alone bishop) by a mile. Still, I try not to descend into Sedevacantism only because of the obscenely bad quality of the clergy in good standing I (more than) sometimes see around me, and one of the reasons I go around and regularly “try” different churches is to hammer into my head that even the bad Mass is a valid Mass and even the stupid priest has valid orders; then if I were to start questioning the validity of the Mass according to the quality of the priest, Sedevacantism would not be far away.

The same reasoning, and the same praxis, I apply to confession. I “shop around” to take the temperature of the local Church: are people there queuing? Is the priest timely? )(Ha!) Is the confessional a traditional one? Does the priest encourage me to repentance or – as many do – to complacency? & Co., & Co.

Many of the priests who have confessed me in the last five years have left me with a strange feeling to say the least. Like eating artificial food, or drinking Diet Coke. Still, as long as the priest says the absolution formula and I can see he is doing what the Church says he should be doing I never doubted (though at times it didn’t come natural, see below) that the confession and the absolution were validly given; even in those cases in which I thought the priest was a waste of space, a robbery of Church bread, and arms stolen to agricultural work.

For the exact same reason, I never went to confession at a SSPX chapel. It’s not that I do think the priest confessing there is a bad priest (I think his chances of heaven are, in fact, extremely high, and I seriously can’t say the same of a couple of confessors I have experienced), but rather that whilst this priest has a granitic conviction he must do it, I know and cannot pretend not to know he is not authorised to hear confessions. This is unfortunate, then I do have more than a mild curiosity to experience the difference with your average V II priest, not knowing whether a torrential rain of fire and brimstone would fall unto me or whether, as it is traditionally said, the priest who is a lion from the pulpit is also a lamb in the confessional.

As I have said, this doesn’t come natural to me. A couple of times, I must admit, I was tempted to think: “this was not a confession, this was a joke; I’d better repeat it somewhere else as soon as I can”, but then I immediately reflected about the gravity of my thought, and started to realise the devil uses bad priests to lead us to doubt the institutions and the sacraments of the Church; then again, if I start to think I can decide whether a confession was valid – even if the usual and expected elements of the confession were there – Sedevacantism can’t be very far away.

This does not mean that the SSPX priest is a bad priest, as he believes the state of necessity does extend to confession. But I simply cannot agree with him on that, and whilst I am rather sure he’ll rank far higher than me in Paradise (if I make it there) I do not think going to confession to him would help me one iota in this respect. 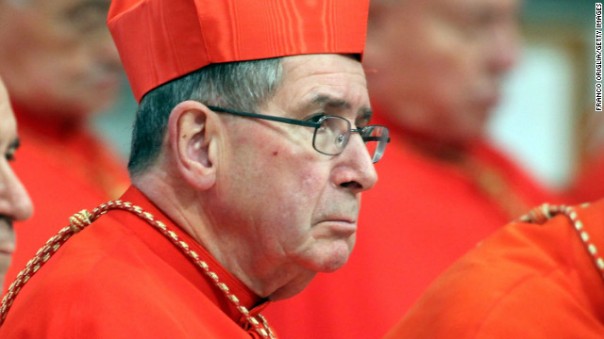 You’re in trouble, Your Eminence.

After Archbishop Gomez’ announcement of Cardinal Mahony’s disgrace, the latter decided to write on his blog an answer to the Archbishop. Unwisely, the Cardinal encourages everyone to disseminate his letter.

I am all too happy to comply.

The Cardinal’s arguments are pretty much as follows:

This is very interesting. It’s the first time I read of a cardinal saying he was never trained as a specialist. No, Your Eminence, of course you weren’t. Your job was, in fact, to apply that modicum of common sense and intelligence than one can expect from every half-way wise person.

I also point out that people become parents – and many of them do an excellent job of it – without receiving a specialised training at school.

Still, this is a new one for the Church, and might be used from other organisations too. I can imagine big whigs of the BBC saying “we did nto receive any specific training about dealing with pedophile journalists”.

2. I made mistakes, but hey, everyone does. Since 2003 no one could accuse me of anything.

This is so twisted Berlusconi would be proud of the man. No one questions the fact that since the beginning of the century the problem has been tackled very aggressively (too aggressively, I would say; but that’s for another day…). The big problem is not what has happened in 2003, but before. In addition, it is clear the turning of screws from 2000 on came at the initiative of the Vatican. This is not something Mahony spearheaded, this is something he had to comply to.

3. Archbishop Gomez did not raise any question since 2010, and now shoots at me with the cannon.

Honestly, I thought as much when I read the Archbishop’s statement. My conjecture is that we are at the vigil of further revelations which would disgrace the Cardinal even more, or else that now a complete picture has emerged that makes the Cardinal’s position utterly untenable. It doesn’t happen every day that an Archbishop orders to a Cardinal to just keep out of his Archdiocese’s affair because he has already made  enough damage.

If you ask me, the  Cardinal has missed a wonderful occasion to shut up; but again, I can’t imagine he would asked me very often. How deluded the man is can be clearly seen from the picture of his horrible, very expensive Cathedral (among friends it is called the “Taj Mahony”)  in a prominent position in his blog page.

Cardinal Mahony was made a bishop by Paul VI. John Paul II made him Archbishop and sent him to Los Angeles, the biggest Catholic diocese worldwide. John Paul II is also the one who gave him his red hat.