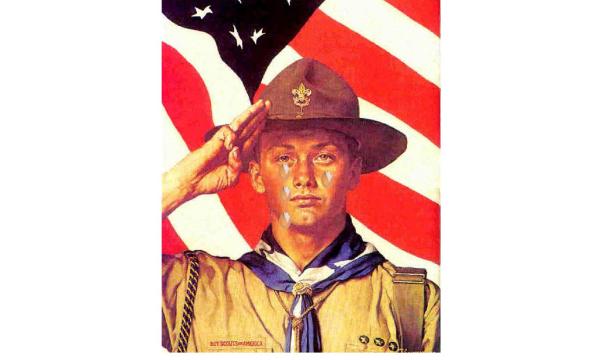 The ongoing controversy about whether openly homosexual boys should be allowed to be members of the Boy Scouts of America is indicative of the confusion reigning in the mind of many people nowadays. I see a lack of elementary reasoning that is simply revealing of the utter failure of modern school systems.

You can read comprehensive articles with a short google research. My comments to what I read around are as follows:

Come on, this is stupid. If there’s one reason why the Boy Scouts exist, is to let boys grow with a moral spine. The idea that morals should be subordinated to sponsorship is exactly the kind of thinking a Boy Scout should never have.

In addition, the argument is self-contradictory. If it is considered discriminatory that there is a national ban on faggotry, it is only a matter of time before it will be considered discriminatory that some local groups do not allow homosexuals, with the resulting withdrawal of sponsorship. Once again, those making the argument of “sponsorships” simply do not think straight.

There has apparently been a decline in membership in the last ten years or so, which according to some implies a crisis. Now, it depends. Membership is not really an indication of real success, particularly if membership is obtained by losing one’s core values. On the contrary, every process of self-finding will cause such a phenomenon, as the organisation purges itself from elements who should not be there in the first place. A world where even the Boy Scouts constantly measure their “success” in quantitative terms is a very sad one, and I can well imagine this mentality might also be a cause of the decline in membership.

A strange Rabbi complains the Boy Scouts would, if the ban persists, continue to privilege one religious view above all others. You don’t say? Last time I looked, the Boy Scouts were clearly inspired by Christian values. The US may well be a very strange Country in many ways, but the idea that Christian, Jewish, Sikh, Hindu, Muslim and Buddhist value should be included in what would probably be the stupidest experiment on earth is rather new to me. Another sign of the times.

IV  The Method
The methods used by the leadership of the organisation remind one of the way David Cameron treats his own party. The grassroots are informed of what the leaders have decided, and they are asked to implement the policy. This is the more shortsighted, as the grassroots in this case are largely constituted by religious organisations having – as they, ahem, often do – a certain way of understanding life.

In conclusion, the impression is generated that a bunch of people either professionally employed by the organisation, or with a vested interest in its membership number and cash flow, have decided that Mammon is going to be the new source of inspiration for the Boy Scouts of America, and were dim-witted enough to say it rather clearly.

If you ask me, this matter should tell the basis organisation of the Boy Scouts of America that they are being led by the wrong people, and the defenestration of all proponents of faggotry at the top of the organisation should be carried out as a matter of course.