Galantino And The Other Hypocrites 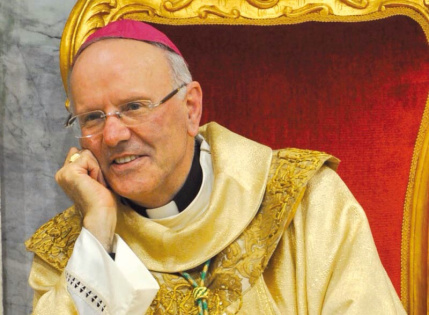 Read on Rorate  Bishop Galantino’s passive-aggressive interview, in which he says he was oh so hurt at how “aggressive” some Catholics were (“people who say they pray they rosary”, the cretin goes on to say) , and then proceeds to take the usual emergency exit of the whiny secular bishop: it was not my fault, it’s the press’ fault.

Now, what is that I find so disgusting in this man’s behaviour?

1. The interview could have been corrected immediately. Actually, even before the uproar, which always take some time to develop. Little coward did nothing. As always, the first headlines were those of the world, praising him for his approach truly worth of Francis. He did nothing. He discovers now, around one month after the fact and after having been ridiculed the world over, that the interview does not reflect his thinking.

2. It is typical of the coward – and also, by the way, of the effeminate man – to react with a whiny, passive-aggressive attitude. He calls the reaction to his interview “an aggression which, in reality, hurt me a bit”. The bishop may rest assured: if he had been made the victim of the same aggression an unborn baby receives in those clinic in front of which the “expressionless people” pray, he would be a bit more “hurt” than from some headlines in newspapers and blogs. He should thank the Lord that he is – unworthily – a bishop, and cannot have his ass kicked all the way to the next train station among the, ahem, very expressive laughter of the present, as he would undoubtedly deserve if he were, say, a priest. Instead, Bishop Girlie goes on record with saying to us how hurt he is from a couple of headlines. Go figure.

3.  The bishop now pretends to have said exactly the contrary of what he has said. Astonishingly hypocritical. Not a word of apology, then, for furthering a massacre by which more than 100,000 babies every here are not “hurt a bit”, but murdered in his own Country.

No. He simply tries – in pure Francis style – to have his very words of yesterday forgotten today. Very aptly, Marco Tosatti makes him notice that enough is enough. Verba volant, scripta manent.

Let us reflect, though, why all this happens.

It all happens because going to the newspapers with revolutionary, fully unCatholic or positively antiCatholic slogans has now become the favourite summer fashion, and every little nincompoop like Galantino feels he has something to earn – in notoriety, which all these people crave, and in brownie points with the Unholy Father – by showing himself oh so progressive.

I am glad to see that resistance to the madness is now gradually becoming more spread, but I am under no illusion that the vast majority of the oxen will continue to be led by the nose by Francis and his little minions, like this despicable little caricature of a bishop. Which is why Francis will, for the time being, continue to sow confusion and revolt (Lio, I think he calls it); and why there will be no shortage of little faggots trying to get their moment of popularity, though throwing the toys out of the pram whenever they discover the reaction is not entirely what they had hoped for.

Francis says 2% of the priests are pedophiles. His “guesstimate” is vastly exaggerated, but it probably reflects the quality of the people he has around him.

The percentage of faggots must be astonishing.

On The Death Of Tony Palmer

The sad news reached me yesterday via “Harvesting the Fruits” that Tony Palmer, the wannabe bishop friend of the Pope, has died in a motorbike accident during the weekend. Palmer is the one who was at lunch with Francis when the man, who if you ask me was rather tipsy, had the idea of making the infamous “brother bishop” video.

Just two reflections here, because time is a tyrant.

1. Pope Francis does not seem to bring much luck. He calls the heathen to pray for peace in the Vatican gardens, and the two camps opposing each other in Palestine start massacring each other (actually, Hamas only tries; but that’s par with how stupid they are) within just a few weeks. He calls a perfectly not ordained proddie “brother bishop” and the latter dies in a motorbike accident. We must not be superstitious, but it does not seem to me that God is exactly smiling on this Pope’s endeavours.

2. Poor Palmer might have saved his soul. We cannot know for certain that he is damned. He might have repented. He might have been seriously thinking of conversion in the weeks preceding the accident. Perhaps he had, just before the accident, resolved to convert. Perhaps he had realised the errors of his ways. We do not know the state of his soul when he died, and we can only hope and pray (yes, we pray for deceased Proddies; and wish them all the best with all our hearts) that he saved his soul in the end. Nothing is impossible to God, and I have always been taught that just before death the effort of Heaven is strongest. Despair is not the answer. We pray for all the deceased because we know this massive effort did take place.

What we also know, though, is that the man was a public heretic, and that it seems very  strange to start invoking “invincible ignorance” for a man who must have had a rather precise knowledge of what the teaching of the Church is, and what extra ecclesiam nulla salus means. A man, also, who was in a way “nearer” to the Church than most Protestants, and there was nothing in him of that “whore of Babylon”-mentality which might lead one to think invincible ignorance was possibly at play. We must, therefore, drily acknowledge that this possibility of salvation is linked not to his public activity – which, the Church says, would clearly suffice to damn him, whatever Francis may think in each of his various stages of sobriety – but to a combination of circumstances in his internal forum: either the clearly improbable invincible ignorance, or an internal motus of the soul toward the Church before he died. This may appear difficult to us but, as already said, for the Lord nothing is impossible.

Does this mean that we must now run to proclaim that Mr (Mister; Herr; Monsieur; Signor) Palmer is probably saved, or even (heavens!) in Paradise, because he was “such a good chap”, and “a friend of Pope Francis”?

Of course not. This would be heretical. The thinking that

is condemned in the syllabus of errors,  emphatically meaning that good hope is not to be entertained. Why? Because Mr  (Mister; Herr; Monsieur; Signor) Palmer was, at the moment of death, outwardly not in the true Church of Christ. So it is, again very drily said, obviously more probable that he is in hell than in purgatory; which is what happens if one dies a Protestant (how some people think invincible ignorance or repentance may send a heretic straight to heaven is beyond me…).

That’s how it is. That’s how important it is to belong to the Only Church. That’s how vital it is that we – with due prudence, but without undue cowardice – make this very simple fact known to the people we love, to those in our circle of family and acquaintance who are, objectively speaking, in clear danger of damnation.

How, then, completely ignoring the issue will contribute to the salvation of one, like Francis, who seems to do his best to positively dissuade people from conversion, I leave to your own reflection. 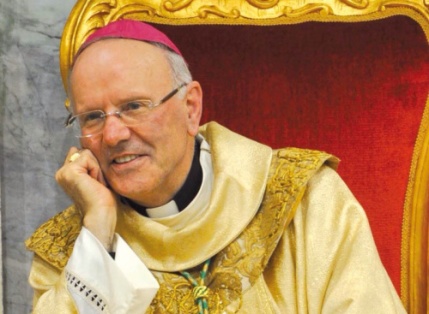 In the staged pose of the wannabe cool idiot: Bishop Galantino.

Read on the usual Rorate the extremely strong article written by Antonio Socci, with a no-holds-barred criticism of the disgraceful Bishop Galantino, Francis’ own new Secretary of the Italian Bishop’s conference.

Whilst – as Rorate points out – Socci is not a Master of Orthodoxy, nor a Paladin of Tradition, I find the article very interesting not only because it is well-written and factually accurate, but most notably because the bunch of idiots now running the Church begins to be treated with at least one part of the contempt and ridicule they have richly deserved for betraying Christ’s Church.

The bishop in question, Galantino, has now after the atrocious sniping of the “expressionless face” of those praying in front of abortion clinics, forgotten all decency again, and I quote:

“We want to apologize to the non-believers because many times…

Comments Off on Bishop Galantino, And Mainstreaming Mundabor