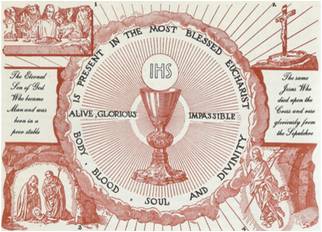 It always strikes me as odd that those most fixated on the opportunity, or necessity, for adulterers to receive Communion are those least likely to believe in Transubstantiation.

But then I reflect that to them the value of communion is not in what it is, but in the way they are seen by the community; that is, in a matter of pure egotistic self-righteousness.

The Wheat, The Tares, And The Pope

This morning, those of you who have attended a NO Mass have listened (or will listen) to the parable of the wheat and the tares.

As I was intently listening (the priest had an extremely loud and theatrical voice, full of zeal and passion; a very effective Gospel reader) I could not avoid making the following two reflections:

1. The reading is, in the present situation, very consoling. It is clear that we must face the abundant tares currently present within the Church, and accept that the field will be a mess until the harvest is imminent. The enemy has planted so much tares within the Church that countless Bishops, Cardinals, even the present Pope clearly belong to the tares rather than to the wheat. The tares are so abundant that they cannot be estirpated without seriously damaging the wheat harvest. More crucially, God will not get rid of the darnel before His appointed time. The Galantinos and the Veras, the Maradiagas and the Kaspers, and even the Bergoglios are the tares sowed by the Enemy to ruin the harvest. Like the tares, they are everywhere in the field. Some of them will, hopefully, repent. It is very realistic to think that most of them will not. The latter will, in due time, be gathered and burnt.

Let us say it once again: God will not cleanse the field for us before His appointed time. We must live with the damn tares. This is God’s will and God’s plan. Thinking of impending end of the world are, with great probability, nothing more than a pious hope born of the refusal to accept that the field has always had an awful lot of tares. The world was always meant to have a lot of tares, and the Church has never be deprived of them. Unfortunately, in this age the seeding of them has been particularly effective, and the darnel is now everywhere. It’s a very messy field. But in essentials, it is how the field has always been.

2. I doubt Bergoglio reads the Gospel other than to try to extract some of the stupid, populist, socialist, childish, or simply unintelligible nonsense he regales us so often with. I know he very probably does not believe in God, does not think he will stand in front of his Judge, and does not care a straw about doing his job as a Pope is expected to do. But I do wonder: if Francis were – perhaps after drinking a grappa too much – to make an effort to read the Gospel seriously and try to understand what it really means, how could he not be shocked at the parable?

It is clear to everyone with a brain to Dalai Bergoglio damnation is a very remote possibility; an event from which he clearly excludes all those who are “in good faith” and “seek the Lord”; actually, an event from which he is happy to exclude even those who do not believe in the Lord, at all (which makes sense, and squares perfectly with the extremely strong suspicion he does not believe in the Lord himself). In Bergoglio’s world, hell must be something reserved to “Pelagians” (that is: devout Catholics), “judgmental gossipers” (meant are again: devout Catholics), mafia bosses, and … well, no one else, really. There is, in fact, no need to even convert anyone to Catholicism, because Christ has already done the job for pretty much everyone.

In Francis’ field, the tares are very sparse, and mainly made of devout Catholics.

How would, then, this probably tipsy Bergoglio react, if he were to really pay attention to what the parable says? How would he explain the obviously huge quantity of the tares? How could he deny that the tares are so abundant that they cannot be uprooted without destroying the entire harvest?

Now: the usual Bergoglio would probably tell you that Jesus was just being cunning, and was deceiving his disciples so that they do not no bad things like, say, going back to Judaism (no, wait! This can’t be! Buddy Skorka is Jewish and perfectly fine where he is! please pick another example, will you?…). But tipsy Bergoglio, who for a moment forgets his own rubbish thinking and tries to really understand what Jesus says with the parable, must be simply terrified.

No worry, though. The event is not very probable.

We all know when Bergoglio is tipsy he is more likely to grab the next smartphone around and send a “video-selfie” to a so-called “brother bishop”, than to read the Gospel and try to get some use from it.