Keep Losing, Or: The Summer Of Blood 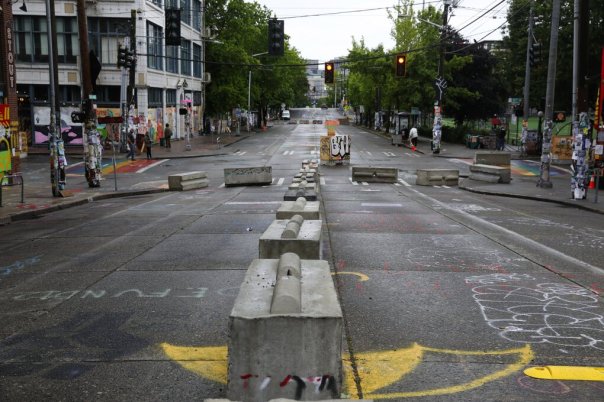 Try to remove those “peacefully” whilst surrounded by thugs…

Even the hard-left BBC does not manage to conceal the utter failure of the Seattle Autonomous Anarcho-Communist Hate Zone known as CHAZ or CHOP.

Almost every day I see newspaper articles with news of a shooting, but no one seems interested in keeping count. BBC is no exception, but I’d say we are at two dead and four wounded in 9 days.

The chief of police whines that people are “not cooperating”. Hey, Ms Sherlock: they kicked your people out! Why exactly do you expect them to cooperate?

This is more damaging to the Dems every day. Violence continues unabated. The police are unable to do anything meaningful about it. The Mayor of the “Summer of Love” has to answer all this.

This is only the beginning. When the CHAZ is, at some point, dismantled, people will come out of the woodwork with tales of violence, intimidation, perhaps rape. Serves them right, of course, but it will make other people think.

Concrete road blocks are now frequent. The occupiers have said they will not go “peacefully”. Even a Libtard understands this is now a free republic for drug trafficking and who knows how many other horrible things.

Every day they do not act, they look more impotent. When they are forced to act, they will look like losers, forced to resort to violence to cut their losses. If Trump intervenes in the end, he will be hailed as the saviour from incompetent politicians.

This is a lose-lose for the Dems. They know it, and they know they need to choose how they lose, fast. But the choice is very painful.

So, for the moment, they choose to just keep losing.

← The Second Lockdown
Second Lockdown: I Hope Trump Reads This Article (He Might Have To Get Rid Of Jaranka First) →
Loading Comments...