And it came to pass the football match wanted by Francis to end the atrocities in the Middle East took place. It must have worked, because when I woke up this morning the birds were chirping with unusual energy, and, clearly, Love Was In The Air. Or not, as the case may be.

The Match To End All Wars took, then, place, and the stadium was half-empty.

How can this be, when Francis The Humble Black Shod Peacemaker was behind the initiative?

Where were all the non-judgmental Catholics so inspired by the “fresh, new approach” of the Unholy Father? The lovers of peace? The Sons Of The Age Of Mercy?

They were, apparently…. everywhere else.

The brutal truth is that the world does not care a straw for Francis, and never was disinterest more deserved. To them, Francis is light entertainment: a short headline on the morning paper, a momentary titillation of their most superficial feelings, a popular “celebrity” among thousands of others, somewhere between Rihanna and Simon Cowell, and in the end with no better standing than them.

The “F” factor is simply not there. What is there is a clown dressed in white, wearing a red nose even when he doesn’t, and riding a wave of popularity that is there only as long as it satisfies the desire of the urban masses to feel excited, and good with themselves. But let this alleged “Francismania” cost the price of a ticket, and all the interest will remain where the plauding masses were yesterday: outside.

Not only is Francis a third-class Pope; he appears well on his way to becoming a third-class “celebrity”, too. As the novelty of the “humble Pope who talks refreshing rubbish” wears out, what remains is a stupid old man who has divested his office of the authority and respect due to it, and now stands there, with a red nose on his face, begging you to look at him as he embraces a wheelchair.

Francis as Great Novelty is getting old fast. Unless he causes graver and graver scandal, even his present antics will soon look like the new normality, causing damage to the Church as they become unable to further the cause of the Destroyer.

At that point it will be probably be wisest to abdicate, playing the new game of Pope Cincinnatus.

“Some people have a formal, public display and then the real life they live behind the scenes,” he continued. “But when we accuse someone else and we are quick to stone him, we must remember that we all have problems and defects. With modern communications so out of control, it is easy to kill someone’s reputation without even investigating about the truth. We should be quieter and less condemning.”

if these very words had been pronounced by the Unholy Father himself, the entire secular world (including the prostitutes, the drunkards, and the homos) would have applauded the Great Man Of Mercy.

If the same Francis had drawn a parallel between Mary Magdalene and any of your “more pricks than years” women who fill the buses and trains of some Western countries, pointing out to her “problematic past before final deliverance” in a world in which, as we all know, God does no more than slap us on the wrist, it would have been a unanymous choir of approval and praise for the refreshing approach of the Bishop of Rome, humbly reminding us of the sinfulness of human condition, bla, bla, & bla.

Alas, the “who are we to judge” meme was, this time, applied to the wrong person: Marcial Maciel.

Consequently, “who am I to judge” was promptly forgotten, and the priest who had produced himself in such a prime feat of Francis-inspired idiocy was silenced and forced to promptly backpedal.

The rule does not apply, though, whenever Francisspeak should be applied to people whom every liberal, whore, drunkard and faggot in the land think he can and should judge.

How is that for a double standard.

And yes, I do think Maciel was a bastard. I do not know if he saved his perverted, lying, thieving ass in the end, and I am not the one to say. But it strikes me as somewhat odd that all these tidal waves of mercy never apply to people who are on the wrong side of the perverted society, even when they are perverts themselves.

Maciel was, there can be no doubt about that, a first-class, certificate-of-autenticity, prize-winning bastard. But he was ordered to lock himself in a monastery, and in his last years had ample opportunity to repent and prepare himself for the terrible day when he would meet his Maker.

Can’t say we can say the same of the countless sinners who live a life of continuous mortal sin, do not care a fag for God – or if they do, think they are fine because they love the Amazonian Forest – and die fully entrenched in their own confusion and error and perfectly persuaded of their own goodness, whilst Pope Francis tells them that God will slap them on the wrist at most, noone is anyone to judge, and proselytism is a solemn nonsense.

But woe to the one who uses the same categories (“who are we to judge”) and the same stupid comparisons (Mary Magdalene and Marcial Maciel) with a person who has fallen out of grace.

The non-judgmental crowd will judge him mercilessly.

Legionaries of Christ and Waffen-SS. 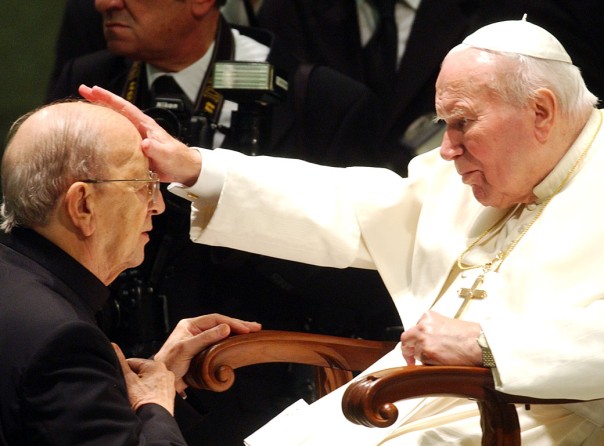 Sandro Magister, one of the most informed and attentively read Vaticanists, has obtained a rather interesting letter from a member of the gravely disgraced order of the Legionaries of Christ.

Leaving aside for a moment the acute (but well-known) considerations of Magister about the energy of the Pontiff in dealing with a man and an organisation that had been able to acquire a status of almost untouchability during the Pontificate of John Paul The Gullible, Magister points out (with the help of the letter, which he reports in full) to these in my eyes very important facts:

1) The hierarchy within the Legionaries of Christ is still largely the one surrounding Marcial Maciel before his fall from grace.