And it came to pass that the organisers of St. Patrick's Day parade caved in to popular pressure and corporate sponsorship and decided that faggots, lesbians and all the other variety of militant reprobation are welcome to the parade dedicated to the Saint, because… they are prostitutes.

A Monsignor of the diocese of Washington and blogger of some repute (about whom I have blogged and reblogged on several occasions: Monsignor Charles Pope) then writes a rather blunt blog post, openly questioning non only the opportunity of such exercises, but the smartness of those who continue to cling to such phantoms of the past after they have been, very clearly, highjacked by the Enemy.

And then… what do you think? In pure Soviet style, the Archdiocese of Washington, who publishes the blog, pulls the article.

Catholicism on the Internet presence of a US Archdiocese? God forbid! We must at all costs avoid that the immense fraud of “Inclusiveness”, “no sense of judgment” NuChurch be exposed for what it is!

Let us pull the article, then. We don't want to be “divisive” now, do we? Let's make a united front and march together with the perverts instead. More “inclusive”, you see. In the brave fag world of the contemporary US church, Catholic voices must be silenced so that the little (or huge, as the case may be) minions of Satan do not feel uncomfortable, and can continue to guffaw their bollocks undisturbed.

Thankfully, the almost omniscient (or at least extremely well-informed) Rorate Caeli has the text.

Ah, the beauty of the Internet! The blog post will now soon have a wider circulation that we could ever hope. Reblog the article on your blog, please. Tweet it around. Let the world know at what point of complicity with evil NuChurch has arrived.

Now let me think one moment: who is in charge over there?

How is it that I am not surprised?

March forward, brave US Cardinals. Hand in hand with militant faggots and lesbians, singing the song of “inclusiveness” in the new “age of Mercy”.

Enjoy their company. You will see it is going to continue for very long after you die. 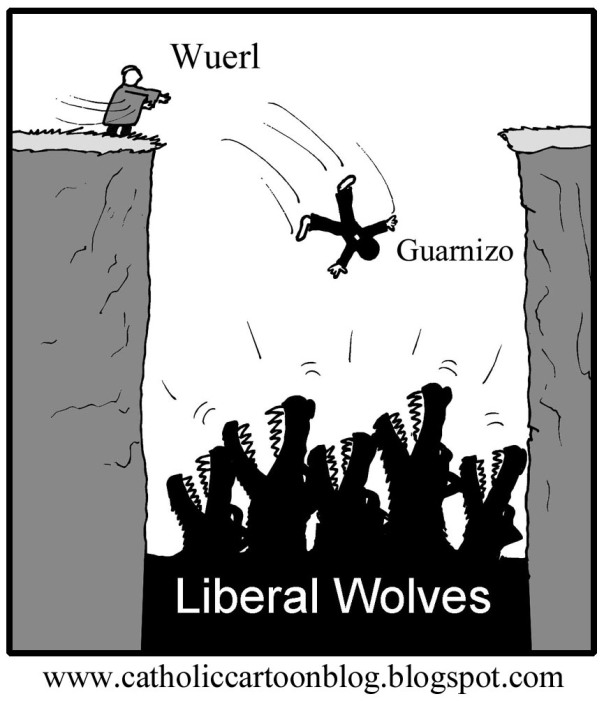 Comments Off on Feed the Hungry?

One truly can't believe the brazen shamelessness of people who call themselves Catholic.

Mr Donohue, whom I understand has effectively masqueraded as Catholic in the past, has now made it known that he supports perverts marching on St. Patrick's day parade; and the reason why he supports the change is apparently (wrong site; therefore no link) that the rules have been changed.

Funny thinking. Like supporting abortion because of Roe vs Wade, really.

I am sick and tired of these paper tigers who are against something only until a court decision – or whatever other decision – against it is taken, and then promptly run to express their “support” today for what they opposed yesterday; relieved, of course, that they are not marching too openly against the mainstream.

If these people had some guts, they would now invite serious Catholics to boycott the parade, and make very clear to them that once perverts are allowed qua perverts to take part, the march can rightfully be seen as an official endorsement of perverted lifestyle, and Catholics must not have any part in it unless they want to be guilt by association and accomplices in this promotion of sexual abomination.

Nothing of this is to be seen.

The Cardinal immediately announces he will not miss the party for anything, and the alleged Catholic activist even support the presence of perverts in their official role as “perverts”.

Mind, he is still “concerned”. He is concerned that they may take their willies out, as they often do, u caring of other people, or children, present.

“You can participate in the march as an official faggot or dyke, and I support you in doing so; but please, please don't be lewd, will you?”.

Whilst the angels cry to Heaven for vengeance for the sin of the sodomites, you support their self promotion.

Fulton Sheen, The Bishop Of Rome, And The Obese Cardinal.

The news of the shelving sine die of Fulton Sheen's cause for beatification comes at the same time as the announcement that the Obese Cardinal will participate to the gay parade (because, make no mistake, this is what it has become) on St Patrick' day.

Dolan is, from what one can understand, behind the decision. But one really can't understand much because, in pure Francis-FFI-style, not much is said.

The beatification cause was now well advanced, the official approval of the miracle expected in just a few months. This is, I am informed, not a miracle in Paul VI-style, but a real one.

Can you imagine the embarrassment of both Cardinal Dolan and the Unholy Father at the prospect of such a beatification? Would they not, then, have to look for a last-minute excuse to prevent it? And if this is so, why then wait for the last minute, when the miracle is already approved? Far better, then, to stop everything in its tracks now, before things get too embarrassing.

We don't know much about this matter.

But I think we know everything there is to know.

Intercede for us, Venerable Fulton Sheen; that we may be freed very soon from this disgraceful clergy.

Fulton Sheen, The Cross And The Christ

Fulton Sheen, The Cross And The Christ