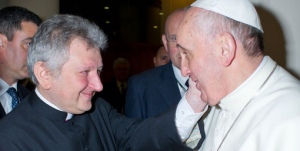 Via the usual Rorate (but strangely, their video does not work on my browser; you might have better luck) this beautiful excerpt of a video interview from the South African Archbishop Napier; who, I am afraid, will not see the red hat in this pontificate:

The good Archbishop is good in what he says. He could, though, in my eyes, have said more. Possibly he did, but it did not get in the video.

1. How can parents chose the “easy way out” and say to their children they must make a lifelong commitment?

2. In life, you must carry your crosses with Christ.

3. If Europeans can be de facto polygamist and receive communion, how can you deny the same to the non-Catholic polygamist in Africa, who marries a “c”atholic wife (among others) and desires to “receive communion”? Such situations are (cough) not uncommon in Africa. Should the Church not take account of the “new reality” and “challenges of the modern times”?

I would add to this that the usual suspects would say: hey, think of the children! How can you ask the man to leave any of his three wives?That would be cruel! And if call him a polygamist, now “I think they would feel insulted and offended.”

What he did not say (or the video did not show):

1.   This particular cross is one of the own choosing of those who are now complaining. No doctor orders anyone to remarry. Divorce and remarriage does not just “happen”, like cancer or Alzheimer’s. It’s a conscious decision. Often (not always), this decision was made in conscious defiance of well-known Church laws, by people who call themselves Catholics. This is as much carrying a cross, as the drug addict “carries” his. Beds, and lying in them, come rather to mind.

2. It would be high time that Bishops and cardinal began to distinguish very loud in public what is meant for marriage. There is marriage and marriage. Unless the sacramental marriage is very clearly separated from a civil ceremony of some faggoty government, people will continue to be confused. They will think, particularly if they are poorly instructed or non-Catholics, that the Church arbitrarily decided “you have only one go”, for some vague desire of, basically, orderly society. It is, of course, also that, but this so much more than that. The sacramental marriage is the *real* and the *only* marriage. The other one is purely state-sanctioned concubinage. It’s a purely heathen construct.

Start calling the first marriage “the sacrament of marriage” and the second marriage “the state-sanctioned concubinage” and see people slowly getting it, or at least not able anymore to muddle the waters. Not even the Proddies, the atheists, or the Tablet readers.

3. This might be too much for a bishop, but it’s not too much for your humble correspondent: I have no problem whatsoever in believing that both Kasper and Francis would not have any problem in giving communion to the African polygamist described above.

Kasper would tell us how “forever” the “commitment” of the polygamist to his many wives is.

Francis would (you know what is coming, don’t you…) say that hey, “if a person is polygamist and seeks the Lord and has good will, who am I to judge”?

Linen On The Hedgerow

We were informed today that Richard Collins, the author of the “Linen on the Hedgerow” blog, is about to die. Sadly, he may be already dead when this post is published.

I wasn't the most assiduous reader of the “Linen on the Hedgetow” blog, but I certainly visited the site with, let us say, regular irregularity. I always liked it, and his author with him. His posts had become more sporadic, and with it my visits. I had missed the one with the news about his cancer, which – as I discovered today – he published at the end of August.

It is, in these circumstances, probably the custom to say “we had our differences, but we liked each other a lot”. Unfortunately, I am not aware of any difference at all that I can remember – and I don't forget easily – and will therefore have to say that to my recollection, and at least as far as I am concerned, we did not have differences, and I liked him a lot. There are not many bigger, more sincere compliments I could pay to anyone, particularly a Catholic blogger.

Mr Collins had, though, a different style. He seemed to me an oldish, serene Welsh gentleman writing about Catholicism with a peacefulness I find difficult to maintain, and I do not know whether his gentle, but forceful message was the product of the gentle seasoning with which time graces us, or a virtue that had always been there. In both cases, one could not do anything else than appreciate it, and think a fortunate garden the one that had such a hedgerow, and linen very satisfied with their lot as they rest on that very hedge, basking in the Welsh sun.

Mr Collins is about to leave us. If he is able to read me – which I doubt – I would like to give him my symbolic pat on the back, and my humble appreciation for his sterling work. If he isn't, I hope that my little name, not unknown to him, will be reported to him among the many which, no doubt, are now sending to him their best wishes and, like me, assuring him of their prayers.

Mr Collins has, though, some privileges I would like to bring to your attention.

To spend one's last earthly hours among loving relatives, with the comfort of the Sacraments, and with the tranquil knowledge of having been a soldier of Christ's army to the end must be a great comfort. It must be, in its own sad way, even sweet.

I doubt I will have the same privilege. I would gladly settle for one of the three only – the Last Rites, of course -; but I might, like many of us, die in times of priests too busy with their social work to send us properly on our way to eternity. This, assuming the possibility is there in the first place.

It is a sad, but realistic reflection that fewer and fewer of us will, in the decades to come, enjoy Mr Collins' graces in our last hours. Let Francis work his … sorcery for some other year, and the not at all coveted title of Last Christian In The Family will be the lot of many of us. Those who die this year might be spared a lot compared with those who will witness an unprecedented attack on all that is holy in their lifetime.

And therefore, and without making it too long, I will allow myself, whilst praying for Mr Collins, to be given in my own hour the same graces that are, today, given to him: the sweetness of dying among people who love one, with a clean conscience, and with the infinite peace that must come from Forgiveness asked and received.

Please accept my compliments and my prayers, Mr Collins. I assure you I will not canonise you after you have died; which means that I will say one or three “eternal rest” for you whenever I think of your beautiful effort.

Enjoy your company, Mr Collins, as much as you can. The love of those you love. The sense of accomplishment. The beauty of forgiveness.

Not many of us will be able to get such a first-class treatment, as you.