The Brazen Cardinal And The Religion Of Conscience 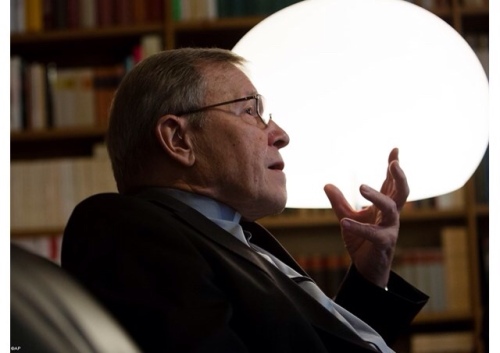 A Cardinal in Jacket and Tie. You have been warned.

Cardinal Kasper is now everywhere, and I fear we will soon find him in our morning cereals.

The latest piece of dissent this unhinged man has now given to the world appeared on News.va, the news outlet of the Vatican.

Many are the dumb, or worse, statements in the interview; but I want to focus on the last issue, the Cardinal's evaluation of Humanae Vitae.

The Cardinal is, as always, rather blunt. One must put the Pope in the contest of his times, which was obviously different from the context of our times (truth is, in his mind, evidently overrated). The attitude one should have is that Pope Paul describes an “ideal”; but hey, ideals are not what they used to be, and nowadays we do things differently. We register the “ideal”, follow our conscience, and contracept (or murder the baby; or divorce and remarry; or support sodomites; or do whatever our conscience says). Not only is this convenient, but we feel so modern…

The Cardinal is promoting a new religion. For the followers of this religion Christianity is the “ideal”, but the moral compass is given by the conscience of the individual. A Kasperian is, therefore, one whose religion is as near to Christianity as his conscience, shaped by his circumstances, allows. Moral imperatives have disappeared, absolute truth must yield to conscience, and three second of reflection are enough to understand that to go against one's conscience can't be bad, and is in fact moral, provided we have this “ideal” – which we have just chosen not to follow – somewhere in the back of our mind.

The Cardinal even has the gall to say that the Pope stated the truth, but one must respect people's conscience. Truth is true, but my conscience trumps it; and going against truth is suddenly “pastoral”.

What a double-tongued old heretical b@st@rd this one is.

Kasperianity is a new religion. It is inspired from the Devil. It is, also, rather energetically supported by The Most Astonishing Hypocrite In Church History (TMAHICH), a man with the guts of calling Kasper's theology “serene” and “profound”.

Take care with whom you choose to side, Christ or Kasper.

You might otherwise, one day, look rather foolish. Infinitely so.

The beautiful words of appeal to ceaseless resistance you read in the title were once uttered by a famous Italian prosecutor – in his farewell speech at the moment of retiring – in the face of spread corruption and intimidation from the powers that be; and, particularly, from the power of… one man.

I am reminded of them rather often, particularly when I see the Catholic troops – of which there is, on the Internet, an awful lot – submerge the false prophets and sowers of error under a tsunami of well-earned reproaches.

First, the “Patheos” blogger selling strange motivational courses was forced to close his combox following the tidal wave of well-earned criticism to his feel-good, inclusive, bit oh so fashionable rubbish. Shortly thereafter, the Gluttoness suffered the same fate. Thirdly, the inordinate rant of The Most Petulant Child In The Kindergarten, a priest with a squeaky voice called Father Nicholson, is the last one forced to shut the door to Catholics. As far as I know, all three of them earn money from their blogs, and are therefore financially interested in controversy. That they are forced to curb a source of earning in order not to lose credibility as Catholic writers altogether really tells you something about their standing among sound Catholics.

But resistance is alive and well, and still kicking strongly. The Catholic laymen on the Internet are giving an example of militant orthodoxy that utterly shames those who should, in fact, be their shepherds. As most pulpits stay silent, an awful lot of keyboards are getting very, very vocal.

One is reminded of the time of Athanasius:,when, as Michael Davies – and before him John Henry Newman – remind us, it was the laity who fought against heresy with a determination that was nowhere to be seen among the clergy at large.

Keep up the good work, brave Catholic men and women. Keep going to the Internet and valiantly defend the Truth. It costs time, effort and adrenalines; but all your efforts and sacrifices – and loss of friends, and mockery, and hostility of various kind – will be as many deposits on your heavenly deposit account, and bear a very rich interest one day; the day when, if you are in any way like me, you will be in the greatest need of it.

As our ranks become thinner – they will one day, I am sure, as the tireless rhetoric of easy “mercy” carries away all but the most solidly instructed and most solidly motivated – we must become even more vocal. As we are more and more insulted, we must grow in stamina and readiness to give battle. Be under no illusion that dark times may end by themselves, or that TMAHICH will magically go out of fashion. TMAHICH belongs to the world, and the world will never stop to love his own. In Francis’ case the world is loved back, with a passion.

But you, my dear soldiers of Christ, never forget the words calling us to action. No matter what TMAHICH throws at us, what we must do is, and remains, the same:

With hypocrisy worthy of TMAHICH – or else, ignorance probably equal – the German Bishops are now in their majority worrying how to face “pastoral challenges” that were “unheard of” until, they say, some years ago.

These people truly have no shame, no brains, or no education. I’d say the first, though.

What they pretend to believe is that perverts living together, perhaps with children, are a modern invention. Have they ever read St. Paul? Is Sodom something “unheard of” for them? Was it difficult to divorce one’s wife, and take another, in Roman times?

No. It isn’t, and it wasn’t. The only thing that is unheard of is the lack of shame of bishops whose only concern is to accommodate and include every pervert, rather than telling him a straight (!) thing or two about, say, Sodom. Salvation isn’t relevant, inclusion is; and when Christianity stays in the way, then you find ways around it, and call all this… being “pastoral”.

And their lie is twice mendacious: it is exactly the willingness of their predecessors to talk straight that caused open-air sexual perversion to be expunged from the traditional Christian society! This happened, in fact, to such an extent, that nowadays the very people who betray the work of those worthy shepherds of the past think they can claim these perverted situations are…”unheard of”! The arrogance of it!

These people are only one thing: Kirchensteuer prostitutes, and enemies of Christ. Though I do not doubt they bask in the popularity they enjoy among German cafeteria Catholics, and have no problem with the wealth it still allows them to enjoy.

Death will, one day, catch them all. On that day, many of them will discover that perverts and their enablers are by no means “unheard of”.

Because it will be full of those around them.

Comments Off on Never Heard Of Sodom